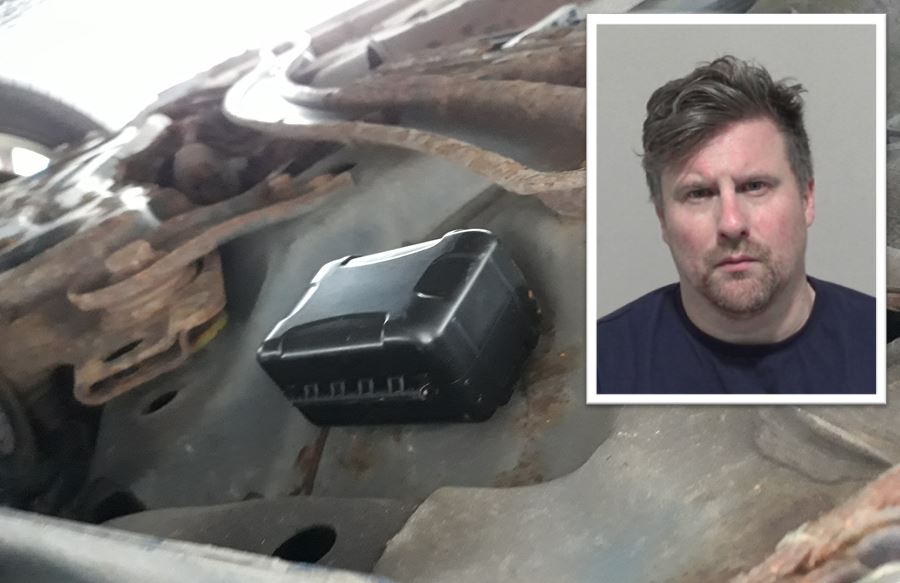 Martin, 41, placed the device, which was connected to an app on his phone, to the vehicle of his former partner after the relationship ended

An obsessive stalker who hounded his ex-girlfriend and secretly placed a GPS tracking device on her car faces jail.

Keith Martin, 41, covertly tracked his ex-partner’s movements using a mobile phone app while repeatedly bombarding her with text messages, emails and visits to her home.

Martin then terrified his victim by turning up at the door of her new boyfriend’s house - with the woman at a loss as to how he had located it.

Worried for her safety, the victim contacted police – and upon searching her vehicle officers found a small rectangular black box that had been fitted to the underside of the car.

The device, held in place by magnets, was later linked to an app found on Martin’s mobile phone which showed the offender the exact whereabouts of his victim’s vehicle.

He has been remanded in custody and is due to be sentenced later this year.

PC Wendy Gribben, of Northumbria Police, said: “Martin is an obsessive stalker who terrified his victim over a prolonged period of time.

“His actions were sinister, calculated and intimidating as he struggled to accept the end of their relationship, and he went to great lengths to ensure his victim could not move on with her life.

“Martin would inundate his frightened ex-partner with text messages and emails before leaving flowers at her doorstep asking for another chance. His obsessive behaviour caused a great deal of upset and fear.

“This has been an incredibly distressing series of events for the victim, and I would like to praise her for the incredible bravery that she has shown throughout this investigation.

“I sincerely hope Martin’s conviction gives her some kind of closure and allows her to start the next chapter of her life, free of harassment and fear.

“We will continue to bring predatory and obsessive individuals like Martin to justice, while ensuring our officers and the communities we serve recognise the signs and understand the heightened risks associated with stalking behaviour.”

In a statement, the victim said she felt “sick” when officers showed her how Martin had tracked her movements after the relationship ended.

“I feel permanently sick and scared,” she said. “Keith has manipulated me and got into my head.

“I am terrified he will do something to my family and carry out a terrible attack on me. He knows everything about me – I am so frightened.

“When the police officer showed me the tracking device he had found on my car, I felt sick.”

Martin will be sentenced on March 23.