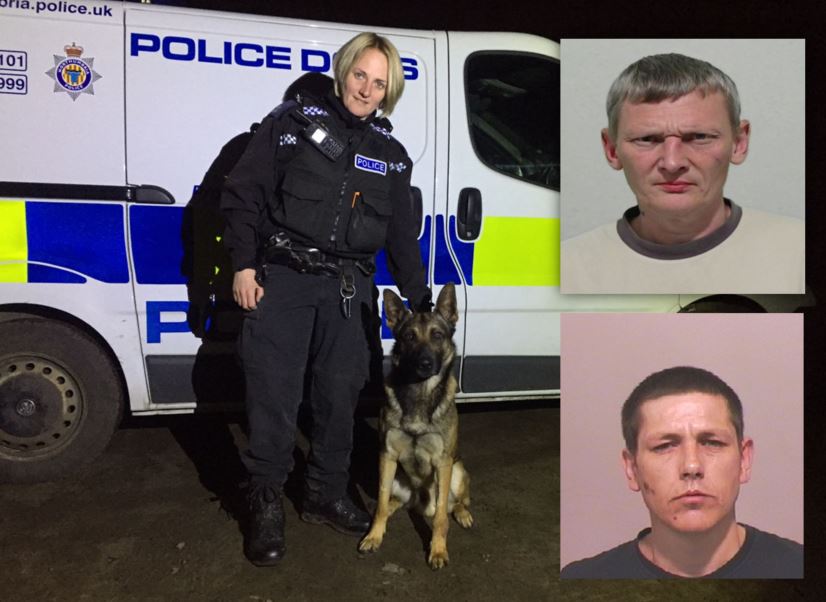 Stevens, 44, admitted burgling the Sunderland premises before he and Podd, 38, led officers on a dangerous pursuit through the city

Two men who led police on a high-speed chase through Sunderland in a stolen Porsche have been convicted.

Darren Stevens, 44, raided a family home on Side Cliff Road in the dead of night as the occupants were sleeping upstairs.

The brazen burglar helped himself to the keys to a Porsche Boxter which was parked outside – and then drove the stolen vehicle to pick up partner-in-crime Michael Podd.

Podd, 38, then jumped behind the wheel of the stolen Porsche and gave it a spin – before police spotted the vehicle and followed in pursuit.

Officers followed the occupants of the Porsche during a high-speed pursuit as the offenders ignored red lights and drove on the wrong side of the road in a desperate bid for freedom.

After crashing the car, driver Podd and Stevens then fled the scene on foot – but Police Dog Zeeke, with assistance from the National Police Air Service (NPAS) helicopter, helped officers locate the pair hiding nearby.

They were subsequently arrested and charged with multiple offences.

Detective Constable Neil Swainston, of Northumbria Police, said: “We make no apology for our tough stance on burglars and Stevens in particular should be ashamed of his actions.

“Stevens targeted a family home and stole their car that was parked outside on the street, showing a total disregard for the law and the livelihood of others, before meeting up with Podd.

“Podd – who had no license or insurance - then endangered the lives of the community and police as he teared along residential streets at alarming speeds and ignored red lights in a bid to get away from officers.

“He is very fortunate that nobody died as a result of his disgraceful actions behind the wheel, and now must deal with the consequences of his very serious criminality.

“We will continue to do all we can to ensure those who bring misery on our communities to justice – and there’s little doubt that our communities can sleep easier with these two individuals behind bars.”

The court heard Stevens broke into the family home at about 4am on October 3 last year and woke up the victim’s dog, which started barking.

That alerted the occupants, who quickly spotted the keys to the Porsche had been taken – and the vehicle, which was later written off by the offenders, had vanished from the street outside.

In a statement read out in court, the victim said: “As a result of the break-in, I no longer feel safe in my own home.

“I constantly keep all my doors locked and I am checking that the door is secure when I go to bed. I’m constantly waking up thinking I’ve heard noises so I am always up and down checking everything is OK.

“This incident has taken over part of my life and I’m finding it quite difficult to overcome what has happened.”

Stevens, of no fixed abode, pleaded guilty to burglary and aggravated vehicle taking without consent. Earlier this month (January 8), he was jailed for two-and-a-half years (936 days) and received a 27-month driving ban.

Podd, of Brady Street, Sunderland, admitted dangerous driving, aggravated vehicle taking without consent, driving without insurance and driving without a license at a Newcastle Court hearing on January 8. He will be sentenced on March 20.