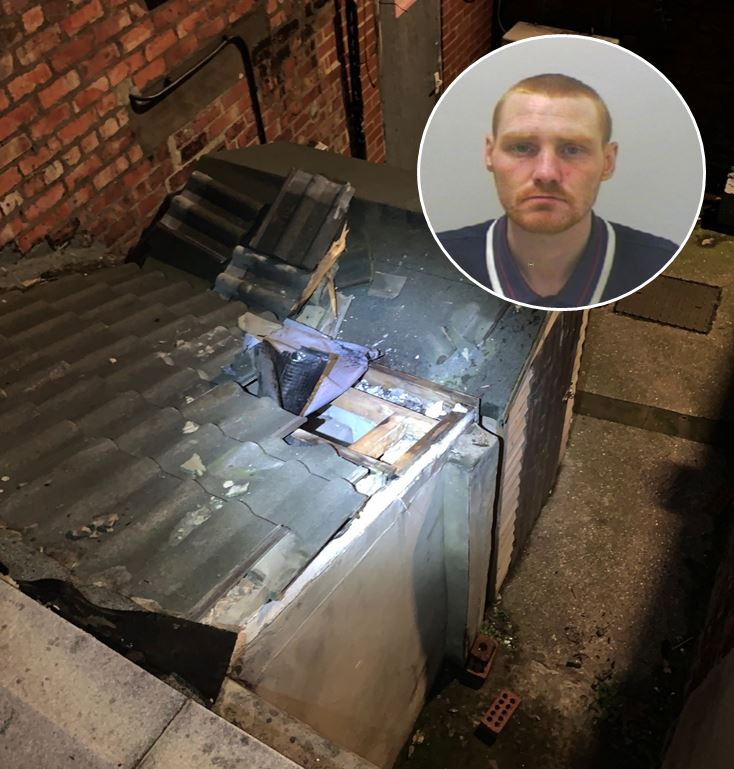 A shameless raider who swiped charity funds during a string of late-night raids has been jailed – after police found him climbing out a hole in the roof.

Heartless Michael Surtees, 32, has been sentenced to five years behind bars after being convicted of seven burglaries across Newcastle throughout 2018 and 2019.

A court was told how the prolific thief was first arrested after he forced entry to a student property on Chillingham Road in Heaton last October.

Surtees stole two kitchen knives before he climbed on to the roof of an adjoining cat and dog shelter. He then used the knives to carefully remove tiles and cut a hole in the roof.

A nearby resident spotted the thief in action and promptly contacted police who arrived on the scene before Special Constable Ryan Young climbed on to the roof.

It was then that SC Young was confronted with a pair of gloves emerging out of the entry point - shortly followed by Surtees hoisting himself through the hole.

The thief was arrested, at which point packages of cash were found in his jacket that had been donated to the charity by kind-hearted members of the public.

Surtees was later charged with two counts of burglary but, while he was on remand in prison, officers received DNA hits that showed he was responsible for a further two raids in Jesmond last July.

During one of the burglaries he had forced entry to a Masonic Lodge where he had swigged vodka and coke from the bar before stealing a number of charity collection tins.

He fled the property but left the vodka bottle behind – giving Crime Scene Investigators (CSIs) from Northumbria Police’s Scientific Support Unit an opportunity to identify him by the DNA he had left on the rim.

Further enquiries also linked him to two burglaries at the homes of vulnerable residents in Newcastle that he committed alongside two other accomplices in the summer of 2018.

In total, Surtees was charged with seven counts of burglary, one attempted burglary and one theft of a motor vehicle. He admitted all charges against him and on Friday, January 17, was jailed for five years at Newcastle Crown Court.

He said: “Michael Surtees has been well known to police for a long time and has been in and out of prison for large parts of his adult life.

“He has never taken the opportunity to turn his life around and the fact he has been convicted of seven counts of burglary shows how prolific he is.

“The fact he is back in front of the court is down to a combination of excellent police work, vigilant members of the public and the offender’s own stupidity.

“Police worked well with the public to initially bring Surtees into custody before forensic enquiries by our Crime Scene Investigators have done a great job to link him to the other raids.

“The fact that he has swigged alcohol, and then left the bottle behind for us to test, shows the lack of sophistication behind his crimes.

“I welcome the lengthy sentence handed down by the judge and hope that our quick response reassures the public that we are committed to putting prolific thieves behind bars.”

Surtees, of Shipley Place, Newcastle, appeared before Newcastle Crown Court on Friday, January 17, after previously pleading guilty to all charges against him.

They review prolific offenders and monitor hotspots so they can identify those responsible for burglaries and try to prevent them taking place in the first place.