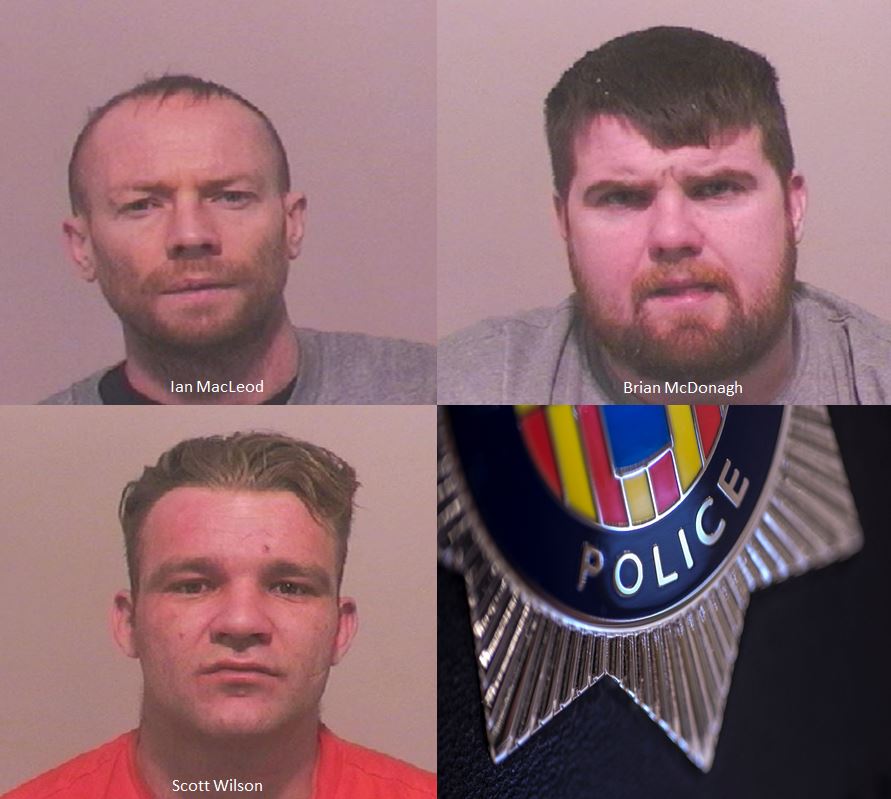 The trio were each jailed at Newcastle Crown Court last week for their role in the frightening raid on January 1, 2019

Three thugs who carried out a terrifying New Year’s Day raid at a family home have been jailed.

The trio threatened the occupants during the frightening attack before Wilson used a baseball bat to smash a series of household items in the living room.

But their offending has now caught up with them as the defendants were last week handed a combined sentence of more than 23 years for their roles in the raid.

Detective Constable David Vincent, of Northumbria Police, said: “This was a ruthless attack that saw these men force their way into an address and use frightening and intimidating behaviour to threaten the occupants.

“Their despicable actions resulted in a number of items inside the house being broken and damaged, while the occupants were shaken by what occurred.

“There can be no question that MacLeod, Wilson and McDonagh are dangerous individuals, and I hope their victims can seek some comfort in the knowledge they have now been convicted of their crimes.

“They each showed little desire to cooperate with police throughout this investigation, and only changed their plea to guilty at the eleventh hour when the evidence against them was overwhelming.

“The streets of Sunderland are a safer place with these individuals behind bars, and they must now face the consequences of their unacceptable actions.”

The court was told the three men were seen on CCTV pulling outside the Pallion address in a silver Saab at around 7am.

The victim then heard a crashing noise come from the living room. When she went to look what had happened, she saw two bricks that had been hurled through the window.

Shortly after, the defendants then burst into the property and Wilson began smashing belongings in the living room with a baseball bat.

They then left via the front door, leaving behind a destroyed lamp, telephone and sideboard.

An investigation was launched by police and a silver Saab was later tracked to an address on Fordfield Road belonging to MacLeod, who was subsequently arrested.

Wilson was also detained after he was recognised by one of the occupants.

Both MacLeod and Wilson pleaded guilty to aggravated burglary on the day of their scheduled trial at Newcastle Crown Court on June 17.

Meanwhile an arrest warrant was put out to locate McDonagh, who failed to appear in court on that day. He was later detained in Bristol and also admitted aggravated burglary.

All three were back in the dock on Thursday (January 16).

McDonagh, of Chesterfield Road, Nottingham, was imprisoned for eight years and four months.