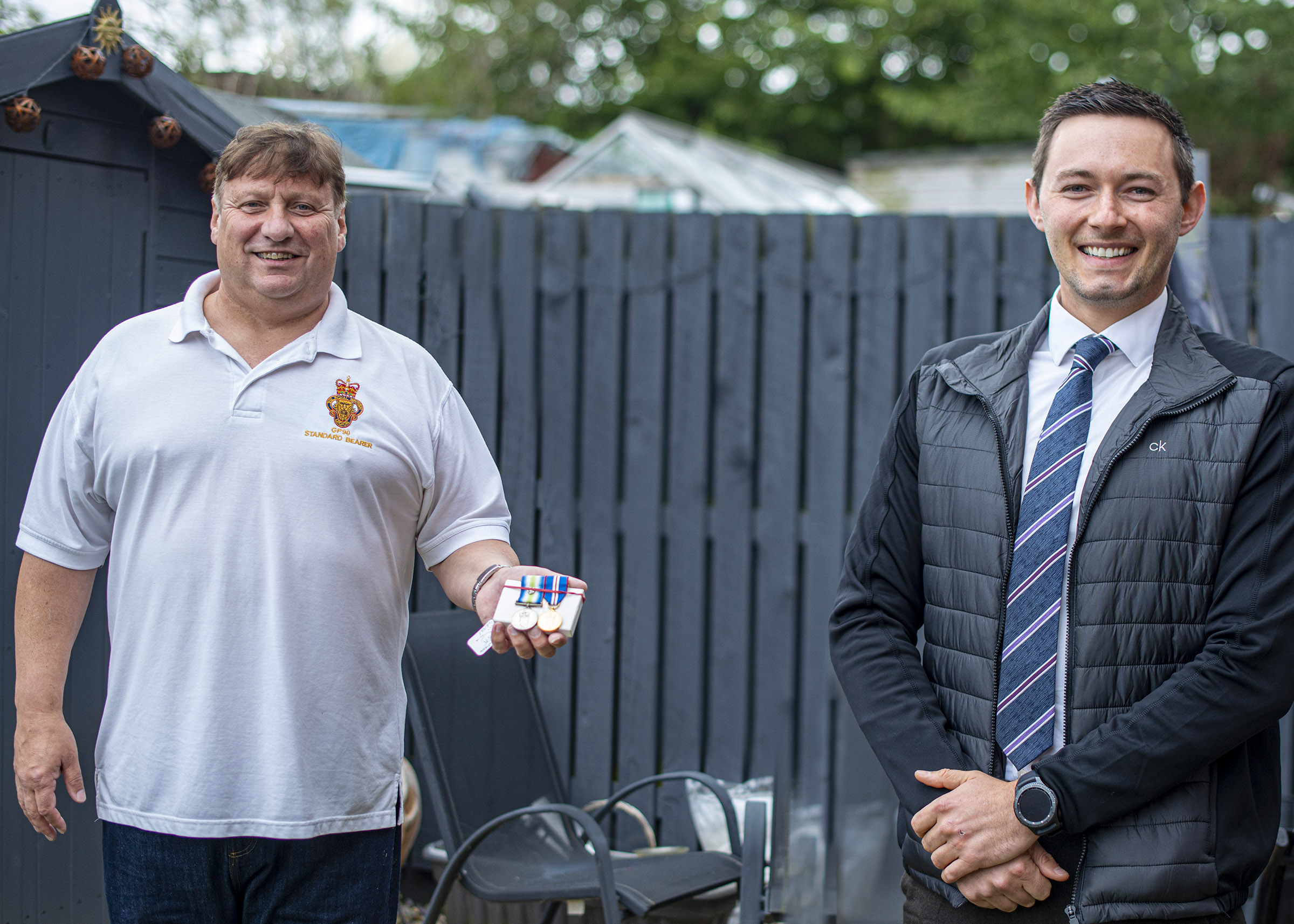 A Falklands War veteran who had his treasured medals stolen 15 years ago received the perfect birthday gift – after police were able to deliver them back home.

Anthony Paterson, whose distinguished career saw him serve in the Royal Navy for 24 years, was left devastated back in July 2005 after war medals were stolen from a house on Mowbray Road in South Shields.

Anthony – who was on holiday at the time – had to endure a painful flight home after learning that his South Atlantic Medal, awarded to servicemen and women who served during the Falklands War, and his 2002 Queen’s Golden Jubilee Medal had both been stolen.

As the years passed, Anthony reluctantly accepted he would never get the sentimental relics back – until his wife Lorraine sensationally spotted them up for sale on a London-based medal website a few months ago.

That allowed detectives in Northumbria to spring into action, locating the business and asking their counterparts at the Metropolitan Police to seize them.

On Monday (July 20), just eight days after Anthony’s 57th birthday, police visited his home in Pelaw and were able to reunite him with his well-earned medals after they had successfully been transported back to the North-east.

“It was the best birthday present – a wonderful end to a long story,” Anthony said. “I was so upset when they were stolen, I was absolutely fuming.

“Over the years, I lost hope that I’d ever get them back – so this was an incredible surprise and I’m really grateful to the police who were able to bring them home to me.

“I actually came close to finding them back in 2010 – my friend came up for the Great North Run and mentioned that he’d recently seen them for sale in a pawnbrokers in Guisborough. He thought I must have decided to sell them, they had my name on and everything.

“But when I travelled down the next day, the shop said they’d sold them only a couple of days earlier to a private collector, and it was going to be almost impossible to trace them.

“I felt that pain all over again, having come so close to getting my hands on them. In the years since, I’ve sporadically checked online on medal websites to see if they’d materialise again, but to no avail.”

That was, however, until Anthony’s wife searched online for ‘Falklands medals for sale’ a few months ago and spotted the items up for sale again – this time on a London-based medal selling website, along with a comprehensive lowdown of his two decades of service.

Uncertain what to do, Anthony rang Northumbria Police who then vowed to track them down – and after working closely with the Met in London, officers were able to courier them back to the North-east.

Detective Sergeant Chris Raper-Smith, who spearheads the Southern Burglary Team based at Southwick Police Station, visited Anthony’s home earlier this week – and is delighted to have been able to reunite him with his medals.

“It’s a really nice end to the story,” Det Sgt Raper-Smith said. “Having something so sentimental and personal stolen, after such a distinguished service, it must have been absolutely horrendous for Anthony to have to come to terms with.

“So often with these types of cases, the medals exchange hands so quickly and it’s very difficult to trace their whereabouts.

“But after Anthony’s wife spotted them for sale online, we were determined to do our bit and make sure we brought them home to him. I’d like to thank my team as well as our colleagues in the Met who worked closely with us to make that possible.

“It was an absolute pleasure to be able to visit Anthony earlier this week and chat to him – and now his well-earned medals are back where they belong. I know it means a huge amount to him.”

Jarrow-born Anthony joined the Royal Navy aged 16 and served on HMS Brilliant during the Falklands War in 1982.

He then went on to serve on various ships including HMS Euryalus and HMS Illustrious, the latter which saw him travel to the Far East in 1997 to oversee the handover of Hong Kong to China.

After 24 years’ service, Anthony left the Navy in 2004 as a Chief Petty Officer – and went on to open a bar in Benidorm, which he named ‘Jarrow Lad’, before returning to the North-east in 2008.