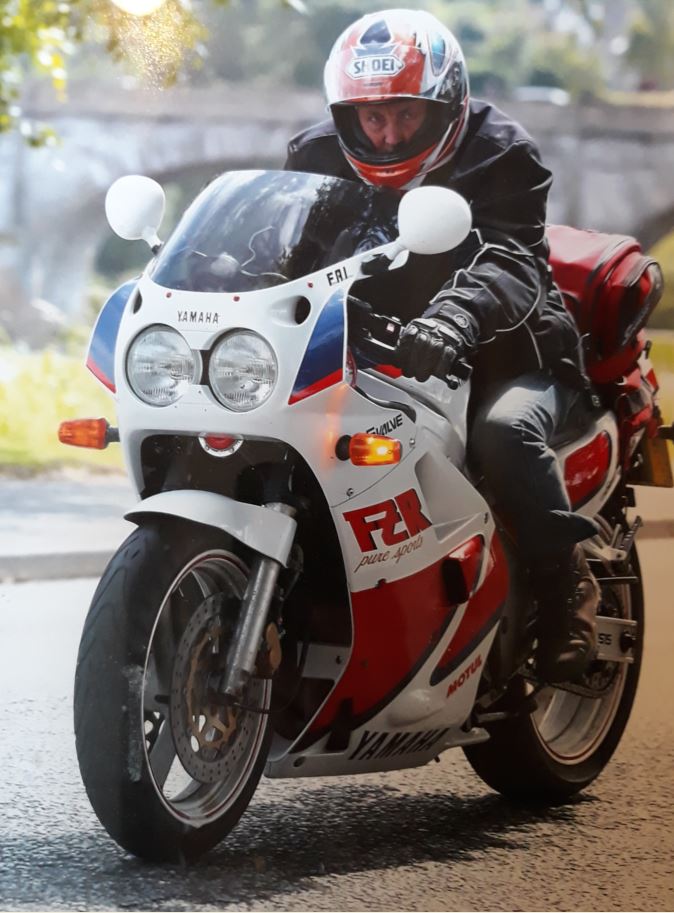 A grandfather who was left devastated when thieves stole his beloved motorcycle has thanked police – after they tracked it down and reunited him with his pride and joy.

Roger Morrison had made the 65-mile journey to Newcastle from his home in Berwick on July 11 to visit Westgate Road where he had bought the Yamaha FZR Genesis 750cc back in 1999.

But the 70-year-old was left devastated when he returned to where he had parked his pride and joy – only to find it had been stolen by thieves.

The grandfather-of-three at first scoured the car park thinking he must have parked it elsewhere but within minutes he realised what had happened.

Having forgotten his phone Roger flagged down a passing police car and alerted them about the theft of his bike but his beloved Yamaha was nowhere to be found.

Officers helped him arrange for a family member to come and drive him back to his home in North Northumberland but Roger had lost all hope that his bike would ever be found again.

But two days later Northumbria Police’s Operation Benelli team were deployed to the Newburn area of the city after a report of teenagers riding a motorcycle in a disorderly manner.

The specialist taskforce searched the area and soon tracked down the stolen Yamaha abandoned in woodland off Newburn Road.

It has since been sent off for repairs but today (Thursday) Roger has thanked the Operation Benelli team for their dogged determination in recovering his pride and joy.

The grandfather-of-three said: “I have owned motorbikes since I was 16 they are my hobby and my passion. This particular bike is special to me as I have owned it for more than 20 years.

“I have travelled up and down the country on it to various racing events and motorbike shows as well as visiting France and Italy on it.

“I maintain this bike completely by myself, I enjoy the maintenance just as much as riding it and I spend a lot of time taking care of it and keeping it in excellent condition.

“I was so relieved to hear that my bike was found and I can’t thank the Operation Benelli team enough- it really means the world to me.

“It’s going to take some time to get it back to its previous condition as the locks have all been broken and some parts are damaged.

“I am hoping I can get my hands on the parts I need as it’s a 1980’s model the parts are hard to come by, but I am grateful just to have it back.”

Detective Constable Ross Bottomley, of the Operation Benelli team, helped track down Roger’s motorcycle and has been involved in hundreds of similar recoveries.

He has revealed that a 17-year-old boy has been arrested in relation to this theft and called on the public to continue to report any suspicious activity across the region.

He said: “We are delighted that Roger had got his motorcycle back as it was clearly of huge sentimental value to him.

“A 17-year-old old boy was arrested and has since been released under investigation and so our enquiries into this incident are ongoing.

“The seizure came about after a tip-off from a member of the public describing a bike exactly like Roger’s after an appeal was put on Facebook.

“I want to thank that person for their vigilance and want the public to know that these kind of calls can be a huge help to us.

“We have seized hundreds of stolen motorcycles and a huge number of those seizures was the result of a report from a member of the public who saw something that didn’t look quite right.

“You are our eyes and ears in the community so if you notice anything suspicious then please pick up the phone and give us a call.”

The Operation Benelli team cover Newcastle and Gateshead and are made up of a number of experienced and specialist officers based at Etal Lane Police Station.

Drugs, weapons, money and stolen property have all been seized by the task-force due to their enquiries into motorcycle disorder.