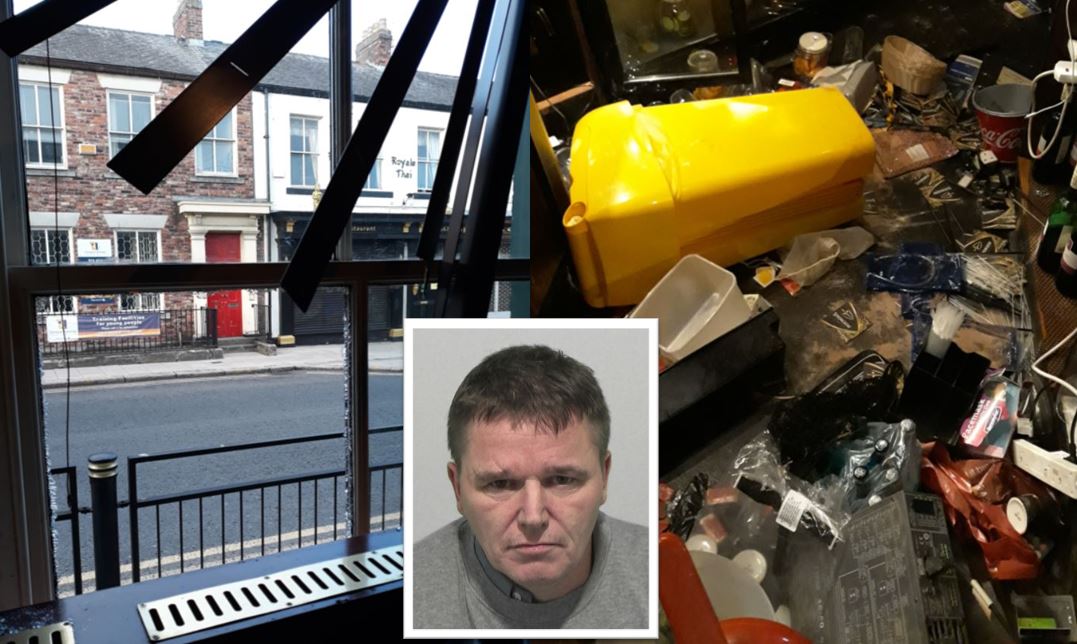 Alan Clarke, 45, is due to be sentenced next month after the break-in at Chaplin's Bar in Sunderland

A heartless burglar was caught red-handed by cops after smashing his way into a city centre bar and attempting to steal alcohol - and cash from a charity box.

Alan Clarke smashed the window of Chaplin’s Bar in Sunderland using a brick in the early hours of July 19 before climbing into the premises in the dead of night.

Once inside, he left a trail of destruction – swiping bottles of alcohol and spirits, damaging the cash tills and even snatching a large quantity of coins from a charity box.

He then tipped over one of the gaming machines and tried to force it open before the bar’s owner was made aware of the break-in.

Police soon swooped on the premises and found Clarke, 45, inside – having pocketed the cash and bagged up bottles of alcohol. He was also found in possession of a Stanley knife and a quantity of cocaine.

Clarke, of no fixed abode, pleaded guilty to burglary, possession of a pointed article and possession of cocaine when he appeared before magistrates in South Tyneside on July 20.

“He showed a total disregard for both the law and the livelihood of the owner, racking up hundreds of pounds worth of damage in a cynical bid to steal alcohol and money.

“Clarke even had the audacity to steal coins from a charity box – his behaviour is absolutely appalling and he should be ashamed of his actions.

“Many business owners have faced a difficult few months due to lockdown restrictions but are now back open and working hard to provide a safe and relaxed environment for customers to enjoy.

“It is therefore especially disappointing that Clarke made the decision to carry out this disgraceful offence, at a time when the rest of the city are pulling together and showing the community spirit that this region is famed for.”

In a statement, the victim revealed the damage caused by Clarke to the window, games machine and till – as well as the alcohol which he had consumed – was worth approximately £2,000.

Clarke was remanded in custody and is due to be sentenced on August 17.