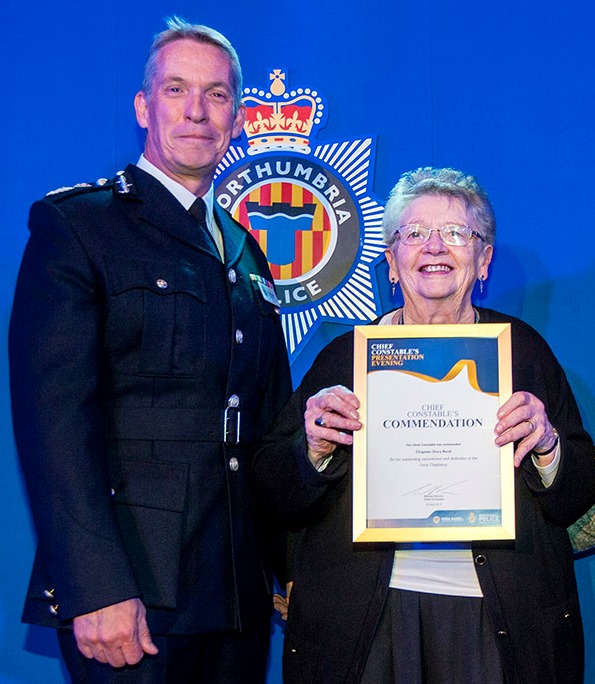 A kind-hearted volunteer who died recently after spending more than a decade offering support to key workers has been honoured by the region’s top police officer.

The 82-year-old had volunteered as a police chaplain in the Force for 13 years offering support to police officers and staff and her fellow volunteers.

During that time she served stations in Ponteland, Cramlington, Morpeth and Wallsend becoming a popular figure across the Force.

Dora passed away peacefully at her home in Gosforth on May 18 following a long battle with illness.

Today (Friday) Chief Constable Keenen paid tribute to great-grandmother Dora and said she epitomised what being a volunteer at Northumbria is all about.

He said: “Dora was an inspirational woman who I had known for some time and who I had built a fantastic relationship with over a number of years.

“She was always on hand to offer me support and advice, during my time at Ponteland and more recently at our Force Headquarters at Middle Engine Lane.

“Everybody in our organisation knew who Dora was because she would spend hours making sure she took the time to speak to every person in the building.

“Even when she began to suffer from poor health, she still made the effort to come in and speak to officers, staff and her fellow volunteers to offer her support.

“Working in the police is extremely rewarding but it can also be an exceptionally tough job and Dora recognised that and was always on hand to be a person we could speak to, regardless of our faiths or beliefs.

“This week is National Volunteers’ Week and she epitomised exactly what being a volunteer is all about and left a lasting impression on us all.

“So much so that in 2018 I presented her with a Chief Constable’s Commendation for her service and I cannot overestimate her contribution to Northumbria Police.

“Dora will be a huge miss and the thoughts and prayers of everyone at the Force are with her family and friends at this difficult time.”

Dora sadly leaves behind her two children, Alison and Chris, as well as four grandchildren and two great-grandchildren.

She was a Methodist Circuit Preacher and volunteered as part of the Force chaplaincy led by Reverend Steve Edge.

Rev’d Edge said: “During her time at Northumbria, Dora established a unique style of chaplaincy, and was highly valued and greatly respected by all those she came into contact with.

“As soon as chaplaincy is discussed in the Force there will be someone who knows Dora and has a story to tell about how she helped or supported them.

“She had a reputation for following through with concerns and establishing long-term relationships with people, in some cases even after they left the Force.

“Dora epitomised all that is best about Police Chaplaincy, her commitment to the officers and staff she visited, her genuine concern for their welfare, and her willingness to always go the extra mile made her a true example to us all.”

This week is National Volunteers’ Week and every day Northumbria Police have been celebrating the volunteers currently working across the Force.

To find out how to volunteer with the police then search ‘Northumbria Police Volunteers’ online today.