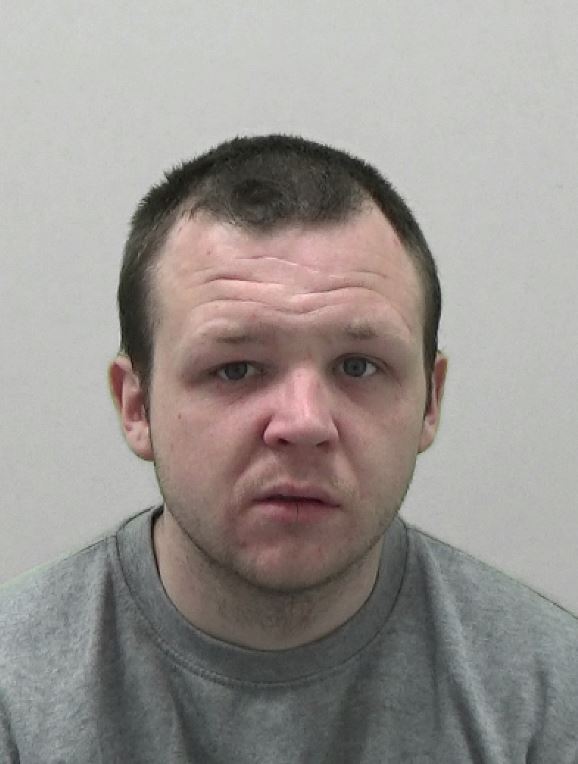 A brave resident has been praised by police after she wrestled with a burglar when he burst into her home and threatened her with a hammer.

Brutish Brian Taylor has been sentenced to nearly 10 years behind bars after attacking the 64-year-old woman in her Gateshead home earlier this year.

A court was told how the 28-year-old thief had targeted the address in the River View area of Winlaton just after 8am on February 22.

He armed himself with a hammer and sneaked into the house through a back door before being confronted by the female occupant in her kitchen.

Fearing she was about to be struck by the hammer, the brave resident sprang towards Taylor and attempted to grab the hammer from his hand.

A struggle ensured during which Taylor threatened to stab the woman and attempted to steal items from the kitchen drawers.

He fled the address empty-handed but just minutes later, Taylor targeted the home of a 74-year-old old woman nearby.

He again sneaked in to the property in the Tynebank area of the village while still carrying the hammer before making off undisturbed with some medication.

Police launched an investigation into the burglaries and were quickly able to identify Taylor following CCTV enquiries in the area.

He was arrested and charged with two counts of aggravated burglary and possession of an offensive weapon.

Taylor, of Springwell Close, Winlaton, admitted the offences and today (Thursday) appeared before Newcastle Crown Court where he was jailed for nine years and nine months years.

During the sentencing hearing, a victim impact statement was read out on behalf of the victim who struggled with Taylor in her home.

It read: “This whole incident left me very shook up indeed. Brian broke into my address in possession of a weapon. I honestly thought at one point he was going to use it against me and leave me for dead.

“Thank god he didn’t though. The way he behaved was utterly disgusting. His actions were completely motivated by greed alone.

“It will take me a long time to get over what happened. I hope the judge sends him to prison for a very long time as it what he fully deserves.”

The officer who led the investigation into the violent break-ins has today (Thursday) praised the actions of the woman who fought off the thug.

Detective Constable Gareth Welsh, of Northumbria Police, said: “This was a violent and cowardly attack on two women in their own homes.

“His first victim was actually an extended member of his family, which in many ways makes his offending even more despicable.

“Her actions that morning were incredibly brave and I have nothing but praise and admiration for the way in which she fought off Taylor.

“She has played an important role in helping us to secure this conviction and I am glad that Taylor will now spend a significant amount of time behind bars.

“He is still a young man but has a number of previous convictions at court and has not yet showed any willingness to turn his life around.

“I hope this time behind bars will give him time to reflect on his actions but I welcome the fact that justice has been served for his victims.”