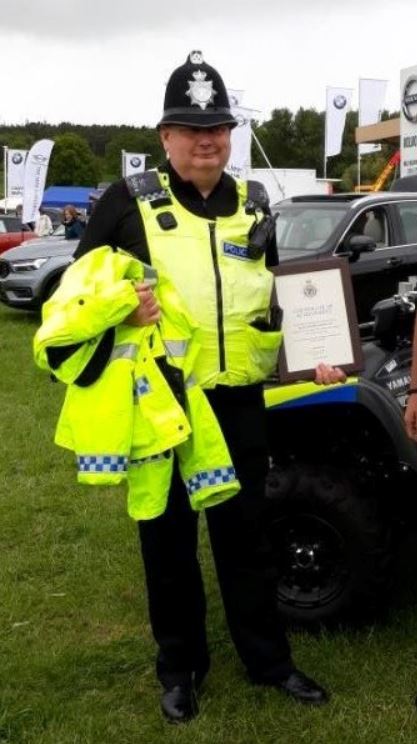 Within 48 hours of his retirement, former PC Jon Gray was back in uniform, this time volunteering as a Special Constable.

This National Volunteers’ Week, we’re shining a light on dedicated volunteers like Jon and all those who give up their time to serve our fantastic communities.

This weekend is also ‘Specials Weekend’ where forces across the country are paying particular tribute to their efforts.

Jon joined Northumbria Police in 1978 and was stationed in Sunderland and Gateshead before making the move to rural Northumberland.

He retired in 2008 after 30 years’ service but with much still to give, he started volunteering as a Special Constable just two days later.

And he’s racked up an average of 20 hours every week since.

Jon said: “Having been posted in Ponteland since 1990 I do this duty out of a sense of loyalty to the service and the area.

“I’m proud to continue to serve the community of Ponteland, which I know and love very much.”

He added: “While I am now slowing down, I assist full-time officers in a supporting way and I always have time to help new recruits.

“I still very much want to serve the local area.”

And Jon certainly doesn’t have plans to ‘retire’ for a second time any time soon.

Philanthropy is also very important to Jon and he has been involved with the Zoological Society of Scotland for more than 25 years and is now a Patron.

The Society is responsible for the managment of Edinburgh Zoo.

The Society are the main sponsors of the Bwindi Forest in Uganda and Jon has visited on several occassions and has been involved in bringing schooling and a hospital to the local village.

She said: “With 30 years of policing experience and decades of community knowledge, Jon picked up right where he left off ... which wasn’t hard as he hadn’t even taken down his retirement cards!

“His advice is so highly sought – I hear ‘Have you asked Jon?’ is a common question in Ponteland.

“It’s always touching to see a retired officer return as a Special, it shows just how truly passionate they are about keeping their communities safe and happy places to live and their commitment to policing.

“Thank you Jon, your dedication is an inspiration to us all.”

Chief Supt Pitt thanked the contribution of all Specials – and other volunteers – across the Force and their famalies and wider support networks.

She added: “I would like to thank all the volunteers who selflessly give up their time and ultimately help us to provide the very best service we can.

“This thanks is extended to their families and employers who support them in being able to volunteer with us – this is a big commitment for all involved and is very much appreciated.

“Our volunteers truly make a difference and should be proud of the contributions they make to the communities they serve.”

To find out about volunteering opportunities with the police search ‘Northumbria Police Volunteers’ online.