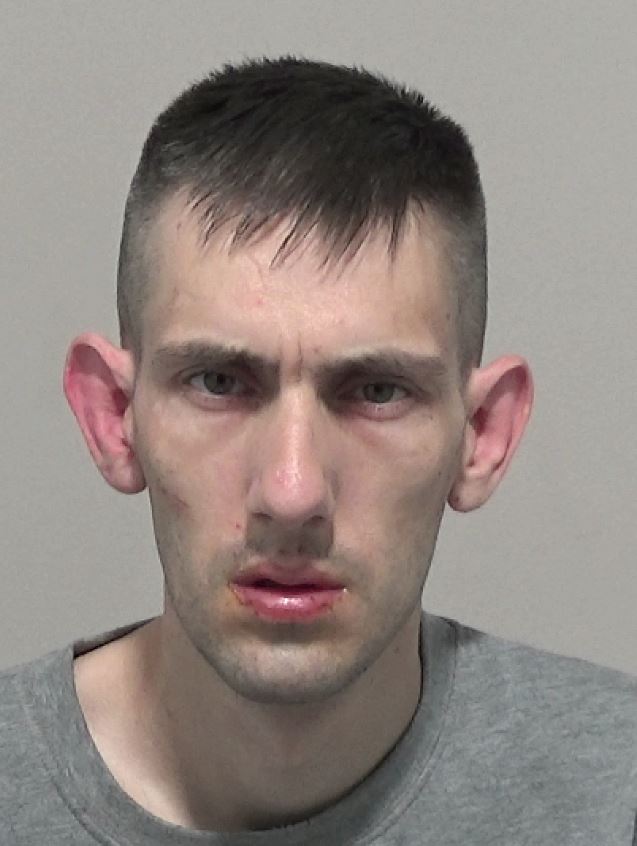 Ainslie, 36, was disturbed when the occupant returned home while he was raiding the address and attempted to flee the scene

Detectives have praised a brave resident who chased an intruder from his family home – after the burglar was jailed for four-and-a-half years.

Merrick Ainslie, 36, crept into the three-floored property on East Vines in Sunderland in September last year and began searching for valuables.

The shameless thief pocketed a gold necklace and some prescription drugs before he was disturbed when a male occupant arrived home and found the front door wide open.

Ainslie then jumped out of a window onto the first floor balcony, before making off with his stolen loot in the direction of the docks.

But the victim, in his 20s, did not rest as he chased Ainslie while police were called – and he was able to direct officers towards the suspect who was later found hiding in the Fish Quay. He was subsequently arrested and found to be in possession of the stolen items.

Ainslie, of Tunstall Village Green, Sunderland, pleaded guilty to burglary and was sentenced to 54 months imprisonment when appearing at Newcastle Crown Court on February 20.

Detective Constable Andy Thompson, of Northumbria Police’s Southern Burglary Team, said: “Merrick Ainslie has shown a total disregard for the law and the community as a whole.

“On the night in question, while a teenage boy was upstairs, he crept into a family home in the hope of stealing anything he could get his hands on.

“But when another occupant returned home and realised something was not right, Ainslie’s crimes were laid bare – and he then fled the scene in the possession of various stolen items in a desperate bid to avoid punishment.

“While we would never encourage members of the public to put themselves in harm’s way, the victim showed incredible bravery and quick reactions as he chased the intruder from his home and was able to direct officers to where Ainslie was hiding.

“Burglary is such an intrusive crime and we understand the long-lasting effect it can have not only on victims, but also their loved ones and the wider community. That’s why we will continue to work hard every day to ensure criminals like Ainslie are caught and brought to justice.”

Det Con Thompson is part of a team of dedicated burglar hunters based at Southwick Police Station who review every raid that takes place across Sunderland and South Tyneside.