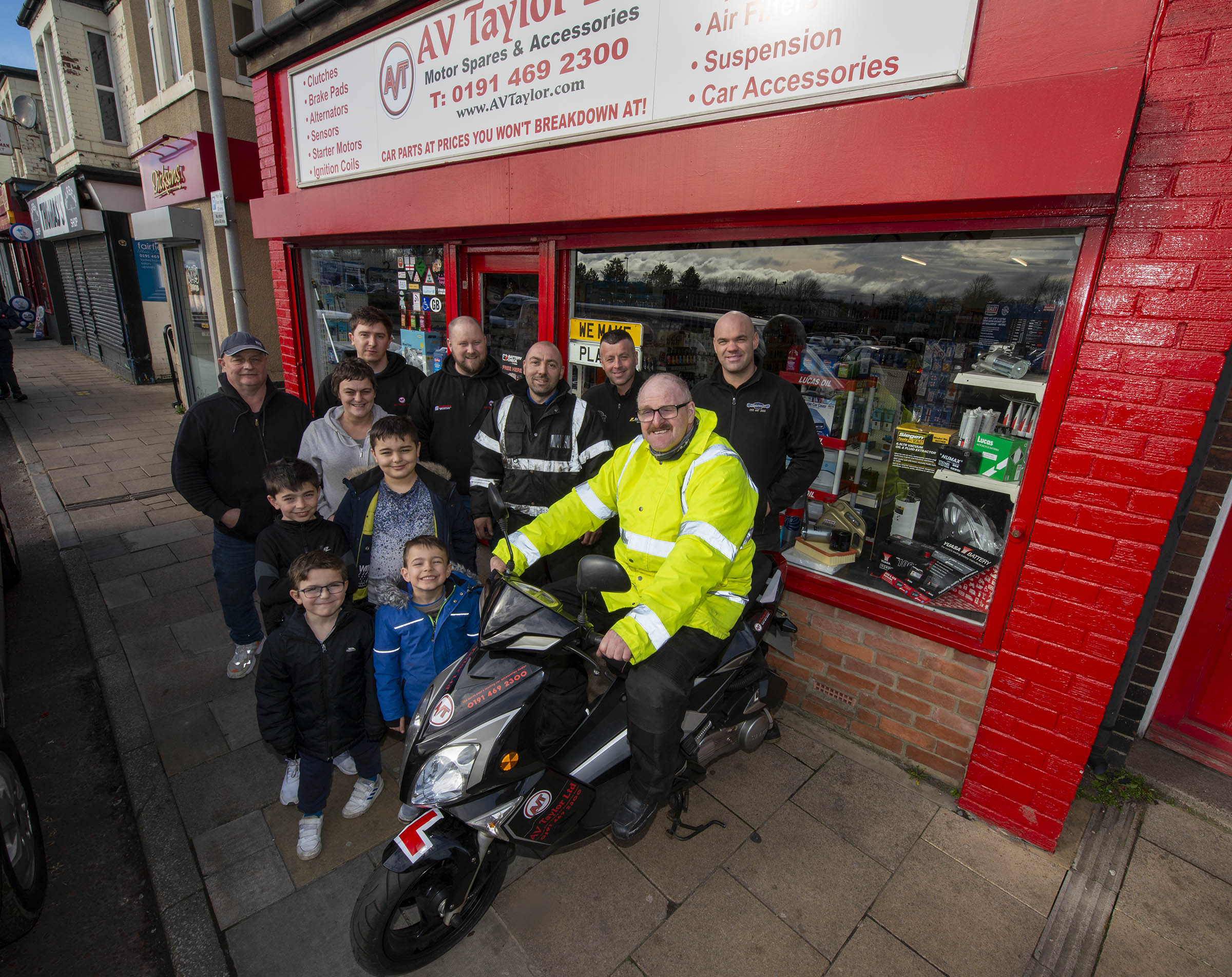 A vulnerable motorcyclist who was left devastated after his bike was stolen has been left overwhelmed – after his community raised money to buy him a new one.

Keith McKeown was crestfallen when his white Honda motorcycle was stolen from outside AV Taylor on Shields Road in Pelaw on January 27.

The 56-year-old, who has learning difficulties, had only owned the motorcycle for six months when the group of teenagers broke the steering lock and wheeled it away.

Northumbria Police’s Operation Benelli team launched an investigation but were unable to identify those responsible for the theft.

But after hearing about what happened, staff at AV Taylor decided to give Keith a brand-new 125cc scooter they had been planning to auction off.

They had been running a Bonus Ball Raffle with customers paying £15 each to purchase a ‘ball’ that would give themselves a chance to win the motorcycle.

After the theft manager Michael Lee contacted those who had purchased tickets and explained what had happened to Keith’s bike and said they were going to donate the new scooter to him instead.

He asked if they wanted their money back but those who bought the tickets declined – and said they were happy for it to go to a new home.

Keith, who lives in the Leam Lane estate, was joined by his sister Julie at the shop last month where AV Taylor presented him with the vehicle.

Julie, who acts as a carer for Keith, said: “He has ridden a bike for many years now and had only had this bike for six months.

“He was inside the shop when a woman came in and told him his bike was being stolen. He tried to chase them but he couldn’t catch them.

“Keith was devastated that it was stolen. He absolutely loves his bikes and he was really, really upset by what happened.

”But he was really grateful for what the shop did and is really pleased to be able to ride his scooter again. I just want to say thank you to the shop and everyone who donated.”

Michael Lee is a manager at AV Taylor and runs the shop on Shields Road in Pelaw that has been there for the past 17 years.

He said those who had already bought the ‘Bonus Ball’ were happy for Keith to have the bike, while the shop itself made up the rest of the cost.

Some of the other local businesses who also chipped in include  CG MOT, Tyres 4 U and ORM Car and Commercial.

Michael said: “Keith has been coming in to the shop for years and he helps out a bit at one of the local garages.

“This happened right outside the shop and it just so happened we had this scooter that we were auctioning off.

“Rather than Bonus Ball it we spoke to those who had bought a ticket and asked if they wanted a refund or if they were happy for it to go to a good cause.

“We also took a few donations from other customers who knew Keith but we took the main shortfall on it because he is a lovely guy and he didn’t deserve what happened to him.”

Detective Constable Sarah Rose, who investigated the incident as part of the Operation Benelli team, says she is happy there was a positive outcome.

She said: “I am really pleased that Keith has been donated a new motorcycle as I know he was badly shaken up by what happened to him.

“He is obviously a popular figure in the local community and lots of people know him from the time that he spends around the shop.

“It was a lovely gesture to donate the new motorcycle to him and I hope we can still identify those individuals who stole his motorcycle that day.”

Picture: Keith is pictured outside AV Taylor with his sister Julie, her children/his nephews, Andy and Michael from AV Taylor , Chris Colpitts from CG MOT, Lee Brydon from Tyres 4 U and Karl Lambrinoydakis from ORM Car and Commercial.