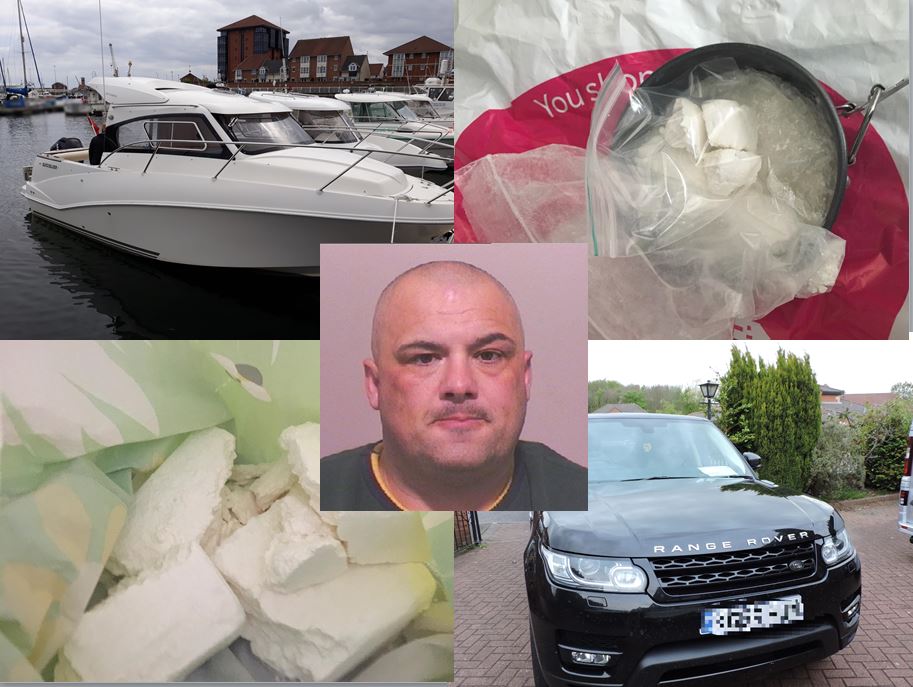 A drug dealer has been jailed following a major operation which saw officers seize 14 kilos of cocaine and amphetamine and a speedboat worth £19,000.

Last year, Kenneth Hunter and his associate William Trott were identified as central figures in a plot to bring drugs to the streets of the North East.

Unaware officers from Northumbria Police’s Priority and Organised Crime team (POCT) had been tracking their movements – the pair had no idea they would soon lead detectives right to their doors.

When disqualified driver Trott, 39, hopped in his car officers pounced and arrested him in the Shiney Row area. The arrest triggered a search of his home where a haul of two kilos of cocaine and 12 kilos of amphetamine were discovered along with other items of drug paraphernalia.

Following recovery of the drugs, Hunter, 41, was arrested as he returned home. A search of his house led officers to a receipt for a £19,500 speedboat which was then subsequently tracked down and seized under the Proceeds of Crime Act along with a range of other vehicles.

The pair previously appeared at Newcastle Crown Court in October where they pleaded guilty to drugs offences.

And yesterday (Friday) Hunter, of St Paul’s Drive in Houghton, who had admitted conspiracy to supply Class A and B drugs, was back before the court where he was jailed for seven years.

Trott, of Hedworth Terrace in Shiney Row, who previously admitted conspiracy to supply Class A and B drugs and possession with intent to supply Class B drugs will be sentenced on May 26.

Following the case, Detective Sergeant Amber Renton said:  “Our officers work incredibly hard to make sure our communities are safe and to prevent harmful substances being sold on our streets.

“We know that people’s lives can be destroyed from drug use and it is our duty to pursue those offenders who have a role in supplying, distributing and dealing these awful substances.

“I’m pleased with today’s sentencing and hope it serves as a warning to anyone involved in this kind of criminality. We will pursue you and bring you before the courts and thanks to the Proceeds of Crime Act, we will strip you of your assets and anything of value your life of crime has afforded you.”