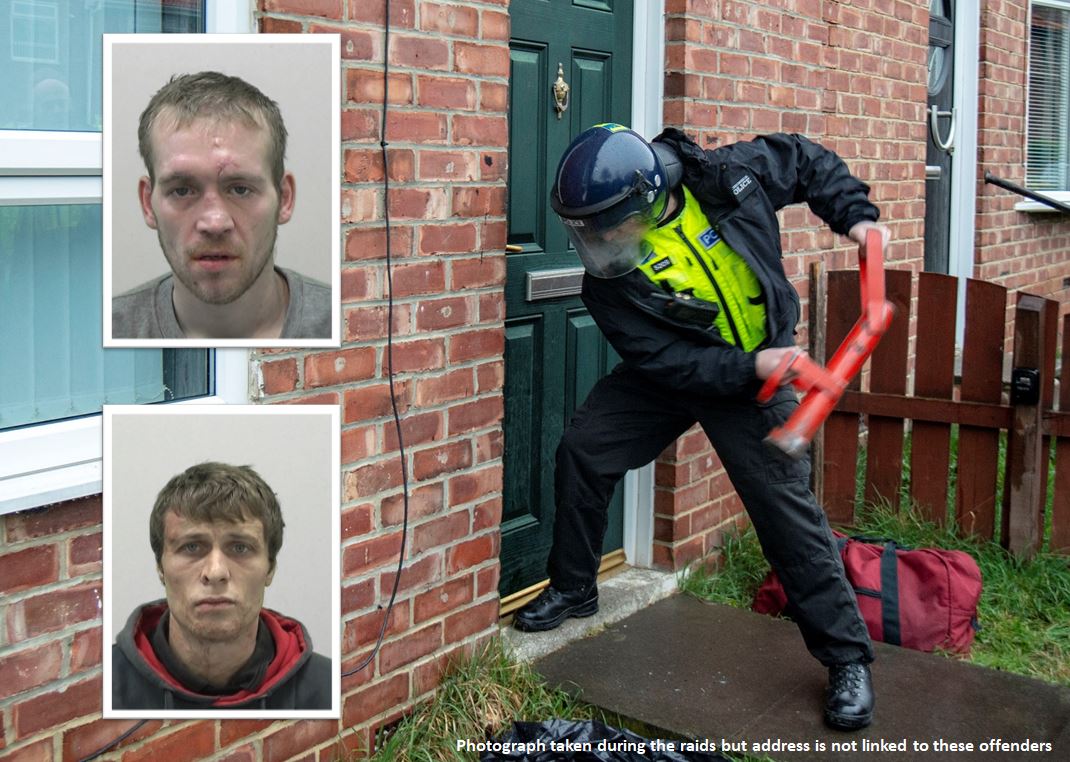 Two heroin dealers have been jailed after they were arrested in one of Northumbria Police’s biggest ever drug investigations.

Stephen Hepple, 32, and James Hall, 31, are the latest drug dealers to be sent to prison as part of Operation Salvator.

The investigation had been launched after figures showed that the number of drug-related deaths in Gateshead had tripled between 2017 and 2018.

Plain-clothed officers spent hundreds of hours carrying out surveillance of suspects they believed to be supplying Class A drugs to vulnerable users.

That culminated in dozens of dawn raids in April last year that saw police visit 37 addresses across the borough.

Hepple and Hall were two of those arrested after we received intelligence that they were selling heroin across Gateshead.

They were charged with conspiracy to supply a Class A drug and later admitted the charges against them at Newcastle Crown Court.

Following the case, Superintendent Brad Howe praised the hard-work of detectives who continue to bring Operation Salvator cases to court.

He said: “Operation Salvator was launched because of a very concerning increase in drug-related deaths and it showed how seriously we take this type of criminality.

“We have been working closely with partners to safeguard vulnerable drug users and last year we did see a reduction in the number of drug-related deaths in Gateshead.

“However, there is still more work to be done and we will continue to do everything in our power to put dealers like these two men before the courts.

“They were motivated by financial greed and preyed upon vulnerable drug users in Gateshead who were trapped in a cycle of addiction.

“I hope that these latest sentences continue to send a strong message to those who prey upon vulnerable drug users in our communities and shows local people how seriously we take this criminality.”

Operation Salvator is just one of many operations carried out as part of Operation Sentinel, a co-ordinated policing response to serious and organised crime across the region.

Officers worked alongside Gateshead Council and seized drugs, cash and weapons during the raids. They also seized 13 vehicles believed to be linked to organised crime.

In total, more than 60 people were arrested during the activity which started in April last year. Since then, 34 people have been charged, four cautioned and 21 others remain under investigation.

Supt Howe added: “We work closely with our key partners and local charities to try to get support for those vulnerable drug users locked in a cycle of addiction.

“Our officers will continue to pursue those who prey upon addicts and by taking them off the street we can hopefully get users the help they need.

“If anyone has information about those involved in this type of criminality then please pick up the phone and call police so we can improve the lives of residents in Gateshead.”

If you have any information about drug dealing in your community then call police on 101 or email central.intelligence@northumbria.pnn.police.uk.

You can also fill in an online reporting form at the Northumbria Police website or contact independent charity Crimestoppers anonymously on 0800 555 111.