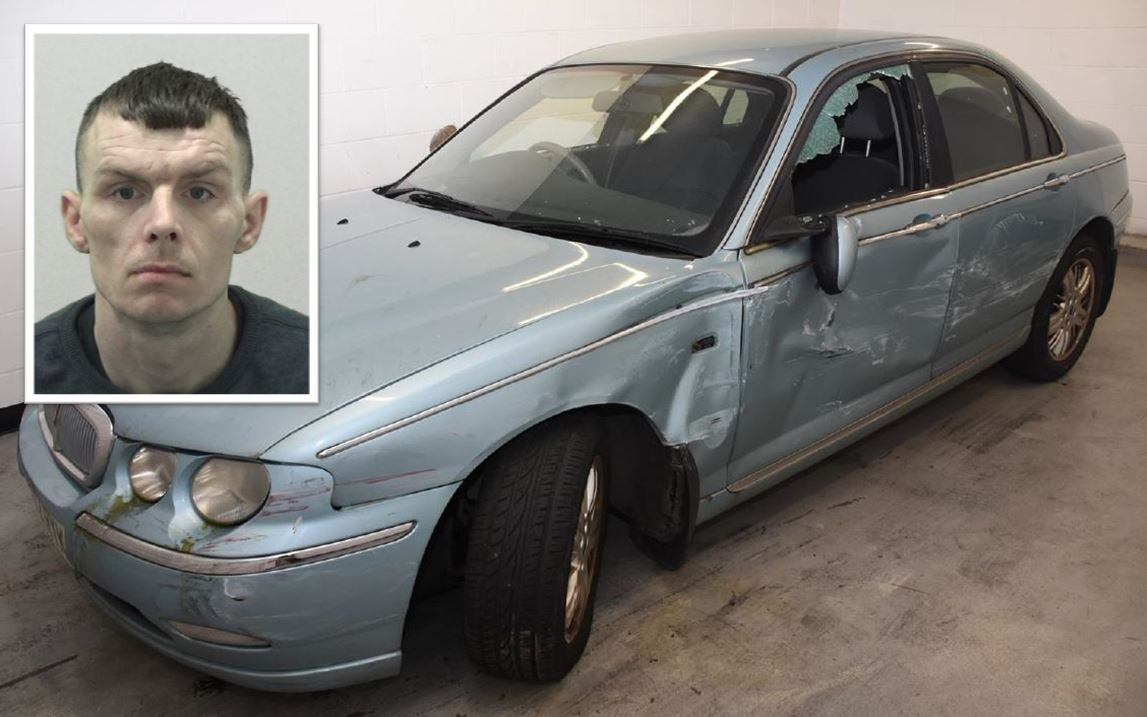 Clamp, 37, is behind bars after admitting a string of offences including burglary, fraud & dangerous driving

A serial criminal who left a trail of destruction during a 72-hour offending spree has been jailed and banned from the roads.

John Clamp, 37, showed a total disregard for the law as he raided a Westerhope home, stole a car and fraudulently used bank cards to buy alcohol.

He went on to smash the stolen vehicle into police cars and other parked vehicles before making a final desperate bid for freedom on foot.

But the law has now caught up with Clamp, who has been jailed for nearly three-and-a-half years and disqualified from driving until December 2024 following a string of convictions including burglary, fraud by false representation and dangerous driving.

Detective Constable Michael Scott, of Northumbria Police, today condemned Clamp’s actions and welcomed the significant sentence handed down to him.

“John Clamp is a serial criminal who has been a drain on police resources for a considerable time,” Det Con Scott said.

“His actions over a 72-hour period back in February were selfish, calculated and dangerous as he smashed his way into a family home, stole a range of items including a car, and then did everything in his power to try and avoid punishment when pursued by officers.

“He also tried to use stolen bank cards in a supermarket to buy alcohol and caused hundreds of pounds of damage as he smashed his car into other parked vehicles and two police cars.

“He clearly cannot be trusted to live in a lawful society, and it’s important that the public see individuals like Clamp – who undermine the fabric and togetherness in our communities – are rightly brought to justice.

“This was a fantastic piece of teamwork by officers – from motor patrol officers who pursued him to the detectives who arrested him after finding him hiding in a loft – and I’m delighted that he has now been taken off our streets.

“We will not tolerate criminality such as this and will do everything in our power to ensure perpetrators are brought before the courts and ultimately put behind bars.”

Clamp’s criminal spree began in the early hours of February 21 this year as he smashed his way into a home on Garthfield Crescent, Westerhope, while the occupants were asleep upstairs.

After gaining entry, he helped himself to various items including a purse, £500 cash, coats and cigarettes – as well as the keys to a blue Rover which was parked outside.

The following morning, the victim received texts from her bank outlining suspicious activity on her account – with Clamp having twice used a stolen bank card to purchase items at Tesco in Kingston Park.

An investigation was launched, and less than 24 hours later, motor patrol officers spotted the stolen Rover being driven towards the Stamfordham Road area of Newcastle.

Officers pursued the vehicle which came to a stop in a cul-de-sac, but after cops approached the driver’s side window, Clamp reversed - smashing into two police cars and parked vehicles.

In a desperate bid for freedom, Clamp got out of the driver seat and fled on foot. Three days later, he was located hiding in the loft of a friend’s house and was subsequently arrested.

Clamp, of Heathfield Crescent, Kenton, admitted burglary, aggravated taking without consent, two counts of fraud by false representation, no insurance use, driving without a licence and dangerous driving when he appeared at Newcastle Crown Court on April 9.

On the same day, a judge sentenced him to three years and 146 days behind bars. He was also banned from driving for 44 months and warned he must take an extended driving test after that date before being considered for a licence.