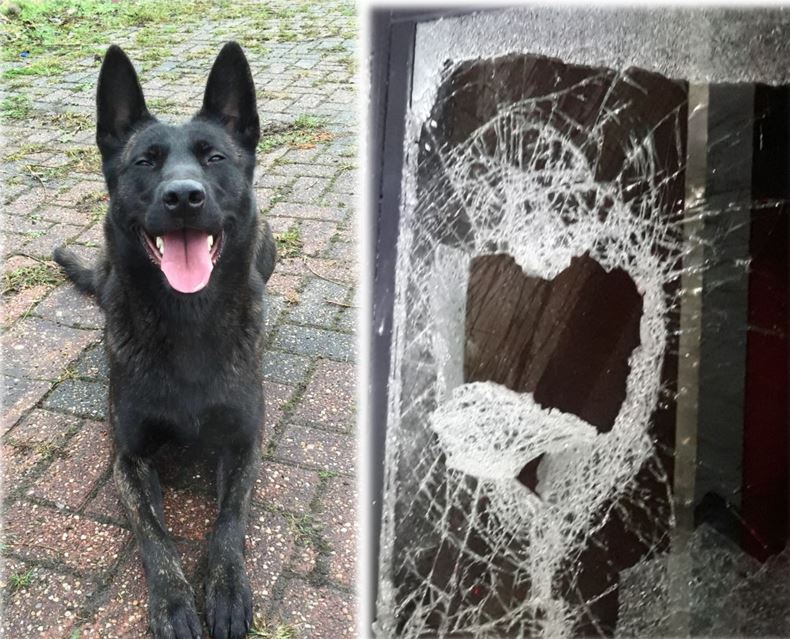 A suspected raider received a big shock after a Police Dog picked up his scent – and led officers directly to his front door.

Shortly before 2.30am yesterday (Tuesday) officers received a report of a break-in at the Lidl supermarket on Roker Avenue in Sunderland.

Police were deployed to the store where they found a smashed window – along with a bottle of alcohol and an axe that had been abandoned outside the front door.

That sparked PD Raven into action, as the seven-year-old Dutch Herder picked up a track and began to lead officers away from the crime scene.

A short time later, PD Raven stopped at the front door of a nearby address indicating the suspect might have gone inside.

Officers subsequently searched the property and located a man inside one of the bedrooms – along with a number of tagged bottles of suspected stolen alcohol.

Detective Chief Inspector Michelle Robson, of Northumbria Police, said: “This was a case of fantastic teamwork between officers and our wonderful Dog Section.

“Officers were on the scene within minutes of the burglary being reported to us, and after quickly assessing the area and gathering crucial evidence, PD Raven picked up a scent and was able to lead us directly to the front door of a suspect.

“It once again highlights the instrumental role that our police dogs have in helping us tackle and detect crime. PD Raven certainly deserved a few treats after the shift – and I’m sure he will earn plenty more over the coming weeks and months too.

“I’d also like to thank the member of the public who picked up the phone and contacted us after seeing something wasn’t right. By doing so, that allowed us to quickly deploy resources and detain a suspect.

“We will not tolerate this kind of criminality and I hope this quick and positive action offers reassurance to businesses across our region, especially at a time when many are still looking to get back on their feet after a difficult few months.”

A 46-year-old man was arrested on suspicion of aggravated burglary and has since been released under investigation.

If you see anything suspicious in your area, please report it to police via the ‘Tell Us Something’ page of our website or by calling 101. In an emergency, or if a crime is happening, always ring 999.