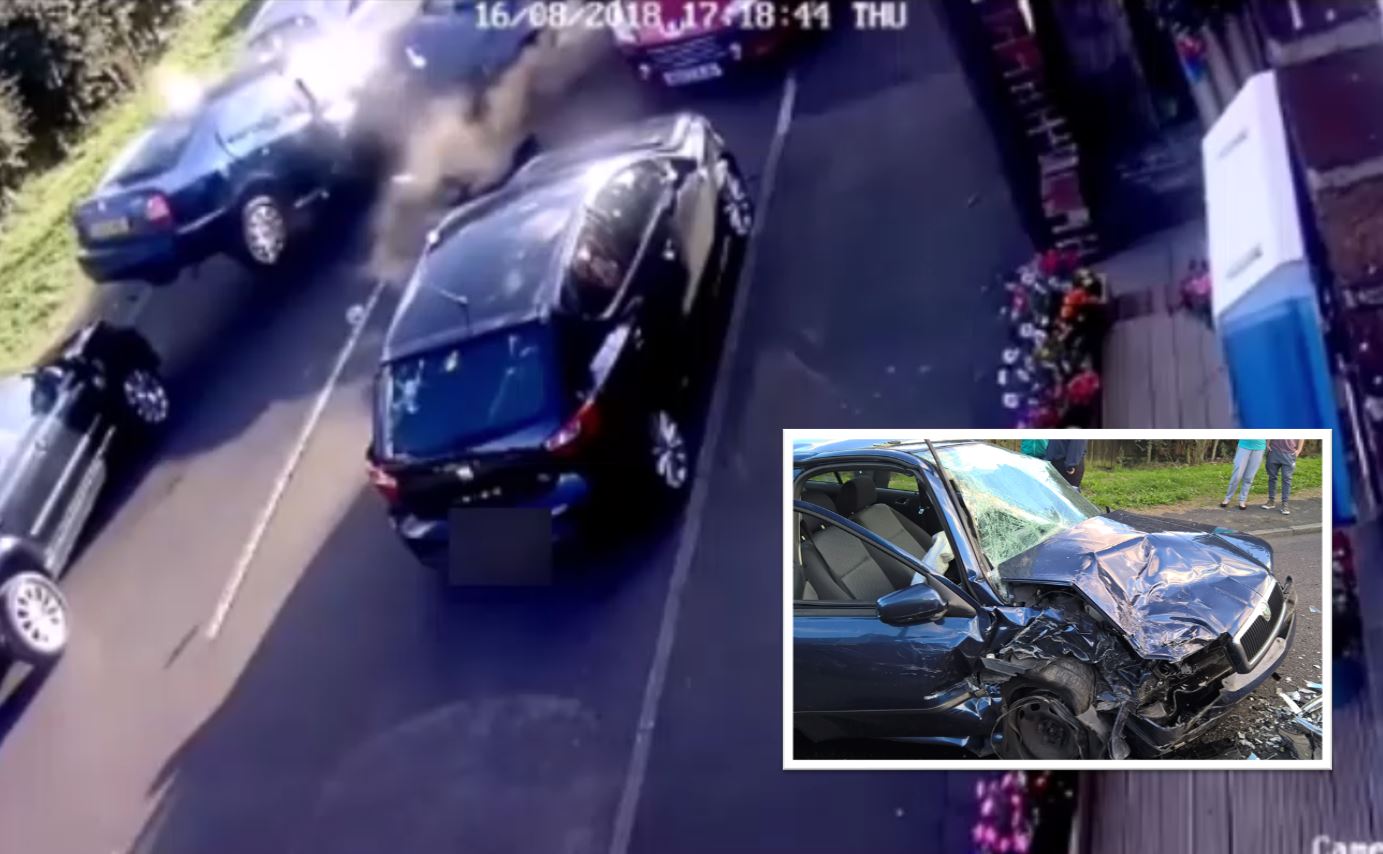 This is the shocking moment a speeding driver ploughs into oncoming traffic – and then abandons his car and flees the scene.

Joseph Henderson is facing a stretch behind bars after being convicted of the horror smash in Gateshead in 2018.

Newcastle Crown Court heard how the 23-year-old was disqualified from driving at the time of the collision on August 16.

CCTV footage showed Henderson attempt a dangerous overtake on Landscape Terrace in Greenside before crashing head-on with another vehicle.

He is then seen staggering from his Skoda Octavia before fleeing the scene on foot – without even checking on the welfare of those in the car he hit.

Thankfully they were not seriously injured but two vehicles damaged in the collision were later written off.

Police launched an investigation to identify the driver and a mobile phone belonging to Henderson was also found by a police dog abandoned in a field nearby.

Further forensic analysis of the Skoda Octavia found that DNA belonging to Henderson had also been found on the vehicle’s airbag.

Henderson, of Severn Street, Chopwell, was arrested but claimed in police interview he couldn’t stop because a of a defect with the brakes.

The father-of-two was charged with dangerous driving but initially denied the offence on the basis that he couldn’t slow the car down.

However, he changed his plea to guilty on the day of his trial on September 7 after admitting his excessive speed prior to the collision amounted to dangerous driving.

Neighbourhood Inspector Warren Sturrock, of Northumbria Police, has said Henderson could now faces a stretch behind bars after “one of the most appalling cases of driving” he has ever seen.

He said: “This case has taken a long time to come to court but now Joseph Henderson is facing a custodial sentence for his actions.

“The footage speaks for itself – it is one of the most appalling cases of driving I have ever seen and he is lucky that neither he, or anyone else, were killed.

“Despite his last-minute guilty pleas he has tried to shun responsibility for what happened since the moment he was arrested.

“Even if his brakes were fading, it doesn’t excuse his excessive speed in the moments before the crash and then fled the scene of a serious collision.

“For all he knew, other members of the public could have been seriously injured or dying but he showed no concern for their well-being.

“I am glad that he has been convicted and want to thank all the officers and witnesses who helped bring this case to court.”

Henderson has been released on bail and handed an interim driving ban ahead of his sentencing hearing at Newcastle Crown Court on November 11.