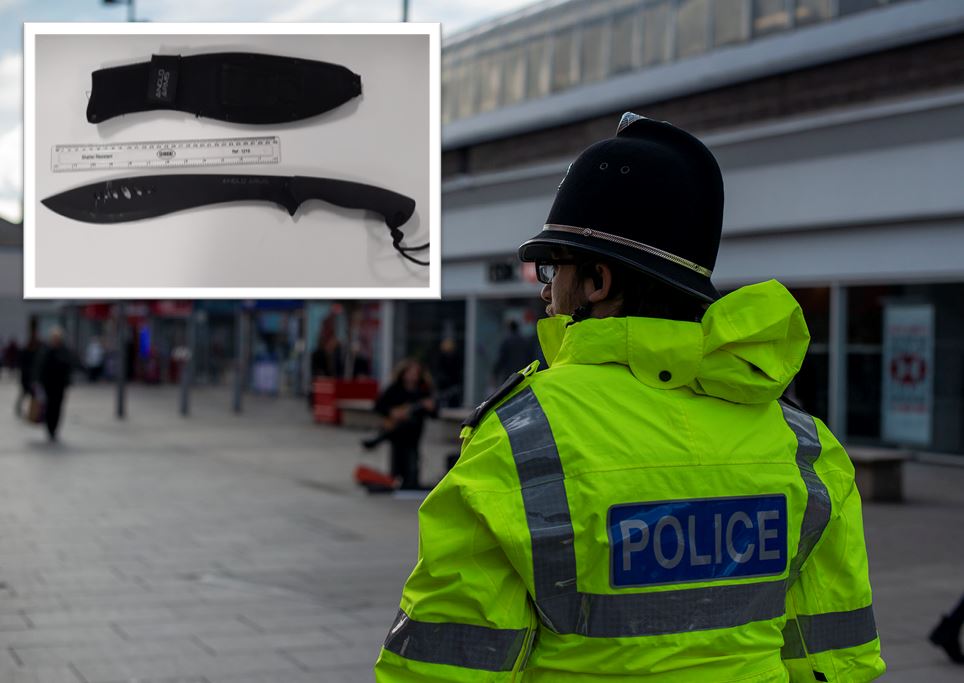 This 12-inch machete was successfully seized by police during a festive operation that saw anti-social behaviour rates plummet.

Officers in Sunderland city centre discovered the large weapon after staff at a shop in the Bridges Shopping Centre raised the alarm.

An employee at a clothing store saw a male enter the store on the afternoon of December 15, and as he bent down to pick up a carrier bag, she noticed the large knife tucked inside his waistband.

On-patrol Community Support Officers (CSOs) in Market Square instantly called for back-up and continued to observe the man’s movements from a distance.

Within a matter of minutes, officers arrived at the scene and a 28-year-old man was placed under arrest, and the machete subsequently seized. He has since been charged and will appear in court in the coming weeks.

Sergeant Maria Ord, of Northumbria Police, said: “There is absolutely no excuse for anyone carrying a weapon and this was a case of fantastic teamwork between businesses and staff to ensure nobody came to harm and the machete safely seized.

“A man has since been charged in connection with the seizure and is due to appear before the courts.

“As expected, we saw a gradual increase in footfall across the city centre throughout December – and that’s why we ran Operation Elf to deal directly with any crime spikes or incidents that arose during the Christmas countdown.”

That was despite many of the team's usual targets spotted in and around the city centre - with on-patrol officers on hand to swiftly react to any reports of criminality.

More than 80 people were proactively stopped or searched by officers in the city centre, and nine arrests made for a range of offences including possessing an offensive weapon, theft, and failing to appear in court.

Five others were served with summons to attend court, while police made nine dispersals and issued 11 Community Protection Notices.

Sgt Ord added: “These results are testament not only to the hard work of our officers, staff but also the ongoing support of the public, the local authority, Sunderland BID and the Bridges.

“I’d like to thank everyone for supporting Operation Elf and helping to make it such a huge success.”

Northumbria Police and Crime Commissioner, Kim McGuinness, added: “We have to get blades off the streets. In the wrong hands they are deadly and as shown here, any report like this is taken very seriously by Northumbria Police.

“We won’t stand still on this - our officers are determined to keep shoppers and local residents safe and Operation Elf is just one example of ongoing work to fight and prevent crime in the area.

“Supporting this work, my Violence Reduction Unit will continue working with young people to tackle issues and look at the causes of crime – nobody should ever feel they are in a position where they need to carry a knife. We need to do everything we can to stop this happening.”

He said: “Operation Elf has played an important role in helping keep our city centre safe over the festive period with our anti-social behaviour and enforcement officers working alongside the police and business partners.

"Seizures like this are evidence of the value of this joint working and the impact it has had.”

Kirsty Currie, operations manager at Sunderland BID, added: "We are extremely pleased with the results of Operation Elf which could not have been achieved without the hard work and dedication of all the partners involved.

"Businesses also played a vital role in being vigilant sharing intelligence through the Shopwatch radio scheme which allowed us to be proactive and the teams stay visible."

The 28-year-old man who was arrested has since been charged with possessing an offensive weapon. He is due to appear before magistrates in South Tyneside in the coming weeks.