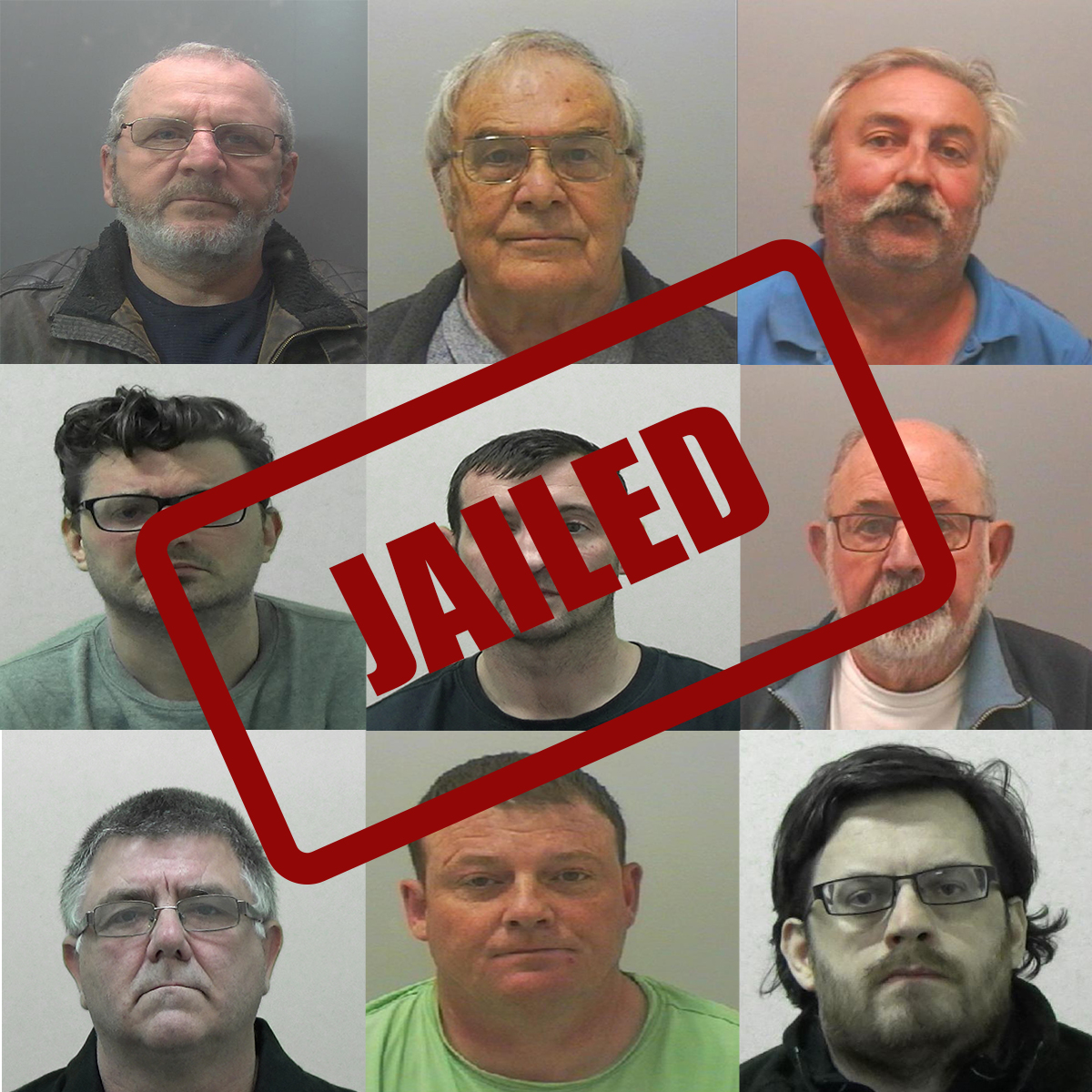 150 years: The most prolific paedophiles brought to justice this year by our officers

They are every parents worst nightmare. These are the most prolific paedophiles jailed this year after being brought to justice by officers from Northumbria Police's dedicated safeguarding unit.

Anthony Burns began abusing children back in the 1980s and went on to rape seven children all under the age of 13.

One brave victim spoke out in 2018 and led Detective Constable David Heginbottom to uncover the horrifying extent of Burns' 40 year campaign of abuse.

Faced with irrefutable evidence, the 57-year-old admitted 12 charges of rape and was was sentenced in July to life with a minimum of 15 years.

Proving it's never too late to report sexual abuse, John Gillis was jailed more than 60 years after subjecting his victim to string of sexual offences.

The 81 year-old carried out the campaign of abuse throughout the 1960s where he would rape and indecently assault his victim.

Detective Constable Julie Wightman fought for justice for the victim and in 2019 Gillis was charged with six counts of rape and two counts of indecent assault.

Gillis of Plessey Road, Blyth, Northumberland is now likely to die behind bars after being told he most serve at least two thirds of a 23 year sentence.

Barry Radford. 23 years after having a 12 years sentence extended by a further 11 years.

Barry Radford was convicted in 2019 for a string of sexual offences upon four teenage boys including grooming and sexual activity. He was also convicted of being in possession of more than 1,000 indecent images of children.

In May 2019, he was sentenced to 12 years in prison but after his conviction, two more victims courageously came forward to report they had also been abused by the 54-year-old.

Radford, of no fixed address but previously of Greystoke Avenue, Whickham, pleaded guilty to 12 sexual offences against children at Newcastle Crown Court and in July this year he saw his 12-year sentence extended by a further 11 years.

Detective Chief Inspector Graeme Dodds welcomed the extended sentence and praised the bravery of all the victims.

Dean Davidson preyed on children online and in person for his own sexual gratification from 2004 until 2020.

But the 38-year-old was arrested in October 2020 after police received intelligence from Instagram that he had shared an indecent image of a child via the app.

Specialist detectives discovered that Davidson used fake profiles under a number of different aliases, pretending to be both young boys and girls, to develop online relationships with children and deceive them into sharing photographs.

A judge at the same court sentenced him to a total of 17 years behind bars, with six years to be served on extended licence.

Leading the investigation, Detective Chief Inspector Louise Cass-Williams said: “Speaking out takes enormous courage and we’re very proud of every single one of the victims for opening up and helping us to not just make sure a predator like Davidson never works in a school again, but is locked up and denied access to the tools he relied on to prey on others."

Wayne Thompson, who preyed on the girls while they slept, was originally charged with rape after one of his victims came forward after being abused in 2019.

While awaiting trial, a second victim came forward to say she had been sexually assaulted more than 15 years earlier.

Thompson, 34, denied both allegations and the case was heard before a jury at Newcastle Crown Court. In April, he was found guilty of one count of rape and one count of sexual assault.

In July this year he was sentenced to 15 years behind bars at the same court with an extended five years on licence.

Detective Constable Nicola Wade, who led the investigation, called Thompson a "predatory paedophile in every sense of the word."

Thompson, of Easington Avenue, Gateshead will also have to sign the Sex Offenders' Register for life.

Terrence Ryan considered himself 'untouchable' after he began preying on young boys more than 50 years ago.

Ryan, now 77, sexually assaulted a young boy in the early 1960s and would go on to abuse three more children in the 2000s.

The pensioner came to the attention of police after one of his victims bravely came forward to Northumbria Police, sparking an investigation by the force’s safeguarding unit.

Ryan, of Austral Avenue, Warrington, pleaded guilty to 14 counts of sexual abuse and was jailed for 14 years and eight months at Newcastle Crown Court.

Detective Sergeant Andrea Burns who led the investigation urged others to come forward and reassured victims "we are here to help".

Paul Berry began abusing his first victim in 1988 when he indecently assaulted a young girl. He then began abusing two young boys in 2007 when he would make sexual advances towards them and sexually assault them.

The victims all bravely came forward in 2019 to report the abuse and an investigation was launched by Northumbria Police's Safeguarding unit.

Berry , 60, was arrested and denied all the allegations but a jury found him guilty of 12 counts of sexual assault at Newcastle Crown Court in March and he was later sentenced at the same court to 14 years behind bars.

Detective Constable Stefan Noakes, leading the investigation, said: "Berry thought he was able to get away with his crimes by lying his way throughout this investigation but the jury saw through his deceit and he now faces the consequences of his actions."


Berry, of Pattinson Gardens, Felling, has also been handed an indefinite Serious Harm Prevention Order (SHPO) which places restrictions on him when he is released from prison and he will have to sign the sex offenders register for life.

Colin Proctor. 12 years with one year on extended licence

Colin William Proctor preyed on his young victims for more than 10 years when they were all school-aged children.

Proctor, 48, was questioned by police but denied the allegations. The case was subsequently sent to trial where a jury at Newcastle Crown Court saw through his lies and found him guilty of a string of sexual assaults.

Proctor of Melrose Avenue, Bedlington  was handed a 12 year custodial sentence with an extra year on licence at the same court after being convicted of four counts of sexual assault and one count of inciting a child to engage in sexual activity.

Detective Constable Danielle Grant, of Northumbria Police, was at court for sentencing and said the victims were “relieved” at the outcome.

Vile paedophile Terry Hopper was sentenced to nearly a decade in prison after he deceived teens into thinking he was a young teenage boy online.

When in his late 20s, Hopper created a fake persona called ‘Matt Hunt’ and began messaging one of his victims through Blackberry Messenger.  They arranged to meet and the victim was horrified to discover her online boyfriend was not a teenage boy but in fact a fully grown man.

When she confronted him and told him she was leaving, he threatened to expose her photos if she did not come with him.He took her to his dingy flat where he raped her and further blackmailed her into not telling anyone what was happening.

During this time, he set his sights on a second victim, aged 12/13, and once again introduced himself as ‘Matt Hunt’. He would routinely watch the girl as she walked to school – going so far as to tell her what she was wearing each day on her morning walk. He pressured and manipulated her into sending nude photos – she hoped if she did, he would leave her alone for good.

Years later both survivors found the courage to expose Hopper.

In May 2021, at Newcastle Crown Court, he entered guilty pleas to rape and attempting to engage in sexual communication with a child and was later sentenced to nine years behind bars.

Speaking following the sentencing, Detective Sergeant Kay Paul, of Northumbria Police’s Safeguarding department, said: “Speaking to officers was an exceptionally brave thing to do and it is thanks to them a predatory paedophile is now behind bars and has been placed on the Sex Offenders’ Register, ensuring he is locked up and unable to hurt others."

Hopper, now 37, of Sibthorpe Street, North Shields, was also made subject to sex offender registration, a sexual harm prevention order and a restraining order in relation to both victims.