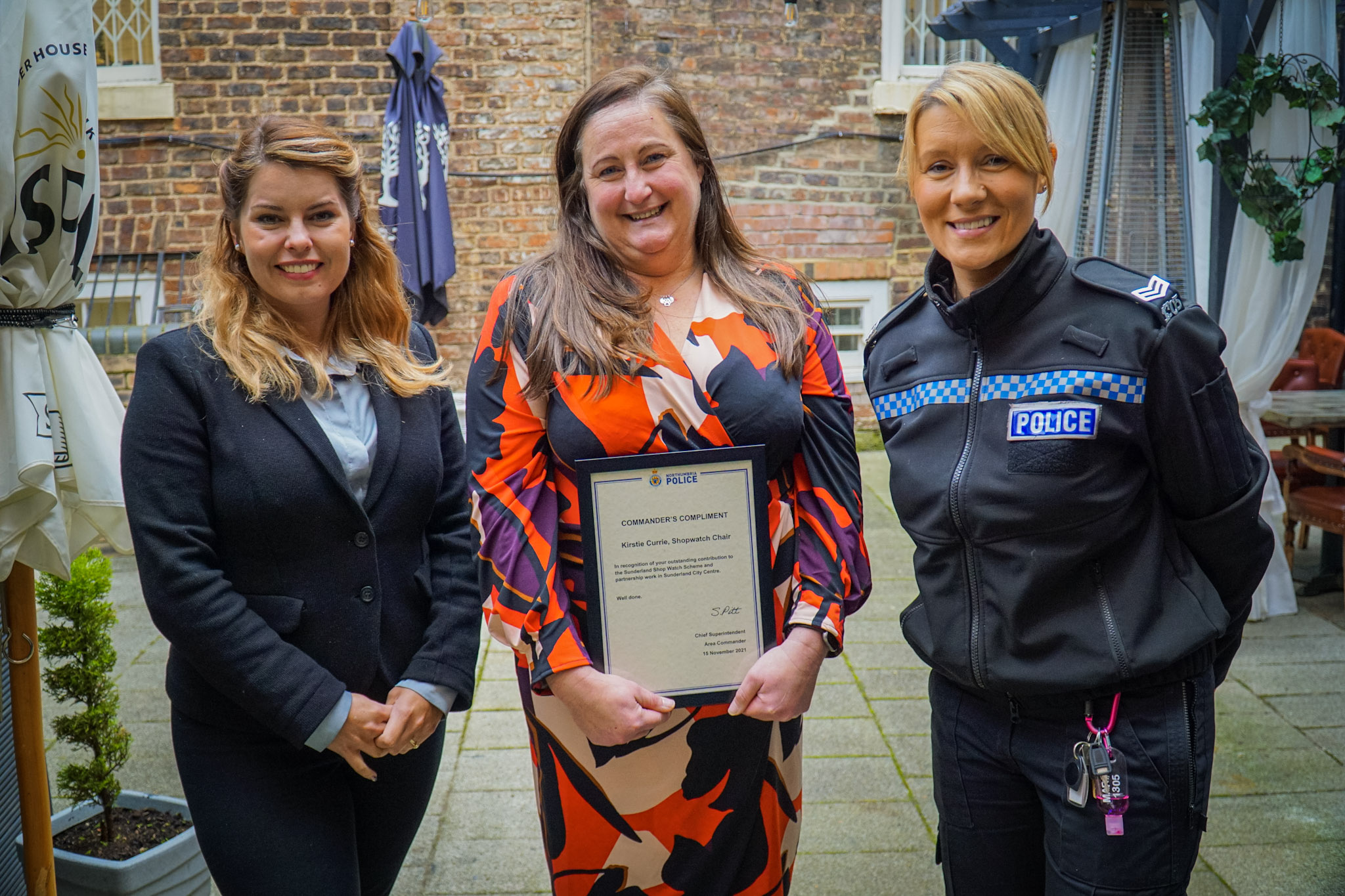 Crime-busting partnership that has put shoplifters, thieves & troublemakers out of business for 25 years celebrates special milestone

A crime-busting partnership that has put shoplifters, thieves and troublemakers out of business for more than two decades has reached a special milestone.

Sunderland’s Shopwatch scheme was introduced in 1996 to help reduce retail-related crime and make the city centre a safer place for visitors, workers and residents to enjoy.

Since then, the initiative has transformed with 54 businesses now on-board working hand-in-hand with police and other city centre partners.

Last week (November 15), a special event was held to mark the 25-year anniversary of Shopwatch with a number of key figures who have been instrumental in its success recognised with special commendations.

Sergeant Maria Ord, of the city centre neighbourhood policing team, said: “There’s absolutely no doubt that Shopwatch has been an incredible success in Sunderland over the years and I’m pleased that it continues to go from strength to strength.

“It really does show the power of partnership working - with police, businesses and city centre partners call sharing information, advice and adopting a problem-solving approach to make sure Sunderland continues to be an attractive and safe place.

“It was set up in order to make the city centre a hassle-free, safe environment for shoppers and protect our businesses who trade there, and I would like to think we have made great strides in achieving that.

“There have been some outstanding examples of all partners working together to tackle and prevent crime, sharing vital intelligence to monitor trends while ensuring at the same time we maintain and promote the vibrancy and welcoming nature of our city.

“The overwhelming majority of people who come into our city centre are an absolute credit to themselves and the area, but like anywhere, there are always a minority who look to commit crime and take advantage of others.

“Our zero-tolerance approach towards offending is only possible by working with our partners in the city – and as we head towards Christmas, our message remains a clear and consistent one. Anyone looking to engage in criminality or anti-social behaviour will be dealt with swiftly and appropriately.”

Among those recognised at Monday’s event was PC Stephen Stringer and PC Gill Calvert, who have been huge supporters of Shopwatch, along with Shopwatch chairman Kirsty Currie - while Northumbria Police & Crime Commissioner Kim McGuinness was also in attendance.

Kirsty said: "I am delighted that the Police & Crime Commissioner was able to join us at our 25th anniversary AGM, speak to members about her plans and listen to some of the challenges businesses are facing in the city centre regarding crime and anti-social behaviour.

"I have been chair of Shopwatch for four years and in this time the city has had to adapt and work much more in partnership to tackle city centre issues, and I am pleased to say that the scheme has and continues to play a big part in that."

Northumbria Police and Crime Commissioner, Kim McGuinness, said the scheme is a "fantastic example" of police and the community working together.

She said: “I know full well that crime and the fear of crime can really impact businesses and the people who run them.

“Shopwatch in Sunderland is a fantastic example of a community-based crime prevention scheme and shows just how well retailers and local police can work together to ensure quick, effective responses to the small minority who take things without paying for them.

“It’s important that the reasons why people do this are very much on our radar too so we can do something about it.

“What is driving people to steal – poverty, addiction, poor education and so on, and my Violence Reduction Unit is supporting our police at tackling these root causes too to try and prevent these problems from happening at all.”