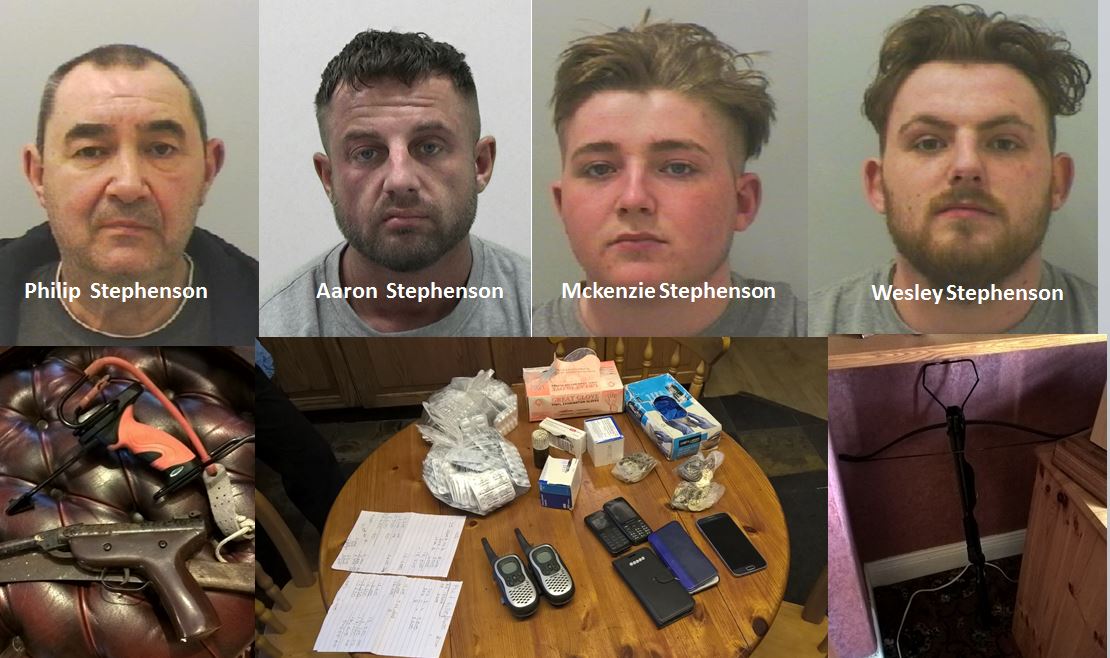 An extradited drug dealer and his family have been jailed for more than 35 years for running an illicit business supplying heroin and cocaine.

Fugitive Aaron Stephenson fled the UK for Marbella last August - two days before he was due to be sentenced for conspiring to supply Class A drugs and possessing criminal property.

Despite his best efforts to evade justice he was brought back to the region a year after he absconded to be held accountable for his role in the illegal sale and distribution of drugs including cocaine, MDMA, Oxycodone and heroin.

The 28-year-old and his two his cousins Wesley and Mckenzie Stephenson all worked with their grandparents, Diane Wright and Philip Stephenson - helping to sell dangerous concoctions of cocaine mixed with carcinogens, worming powder, laxatives and laundry detergent.

What the family didn’t know was that a team of detectives from Northumbria Police had been closing in on them having launched an investigation into their shady dealings.

And, on Valentines’ Day, 2018 they were all arrested following a series of raids at their home addresses which saw almost £40,000 cash seized alongside bulking agents, a crossbow, air weapon and bullets.

The family were charged and later convicted following a six-week trial at Newcastle Crown Court and were due to be sentenced days before Aaron fled to Spain.

A year later, he would be brought back to the UKL with the help of Spanish authorities and the National Crime Agency to face justice alongside his relatives.

And, on Friday, a judge sentenced the family to more than 35 years behind bars, marking the end of a lengthy and complex investigation.

Speaking after the hearing Superintendent Paul Stewart, of Northumbria Police, welcomed the sentences, saying they contempt and disrespect the family had shown the justice system.

He said: “This result has been the culmination of several years of hard work from officers who are passionate about keeping organised crime out of our communities.

“Not only did the Stephensons selfishly exploit vulnerable drug users by selling dangerous and potentially toxic illegal drugs, but they showed a total disregard and lack of respect for our justice system, especially Aaron, who thought he could live out his days in Spain.

“He was given a number of opportunities to do the right thing and hand himself in but instead he was brought back in cuffs and I am thankful his sentence is truly reflective of his reckless behaviour.

“The Stephensons thought they were untouchable and I am pleased with they are now all behind bars where they are unable to inflict any further harm on our communities.

“I’d like to take this opportunity to thank all the officers and partner agencies who helped with this investigation and helped us achieve such a positive result.

“We will now look to put a series of applications under the Proceeds of Crime Act before the courts to ensure anything a life of crime has  afforded this family is seized and forfeited.

“I hope these strong sentences serve as a warning to anyone who thinks they can get away with supplying illicit substances across our region. Under the banner of Operation Sentinel we will continue to tackle organised crime in all its forms.”

The family were sentenced as follows;

- Diane Wright, 62, and Philip Stephenson, 68, both of Woodhorn Road, Newbiggin, were found guilty of conspiracy to supply Class A drugs and possessing criminal property and sentenced to 11 years and six-and-a-half years respectively.

- Aaron Stephenson, 28, of Woodhorn Road, Newbiggin, was also found guilty of conspiracy to supply Class A drugs and possessing criminal property and jailed for 13 years.

- Wesley Stephenson, 25, of Storey Crescent, Newbiggin, was found guilty of being concerned in the supply of Class A and C drug and given two years suspended for 18 months with a curfew for six months

- Mckenzie Stephenson, 24, of Aidan Grove, Ellington, pleaded guilty to being concerned in the supply of Class A drugs and was jailed for 5.2 years.