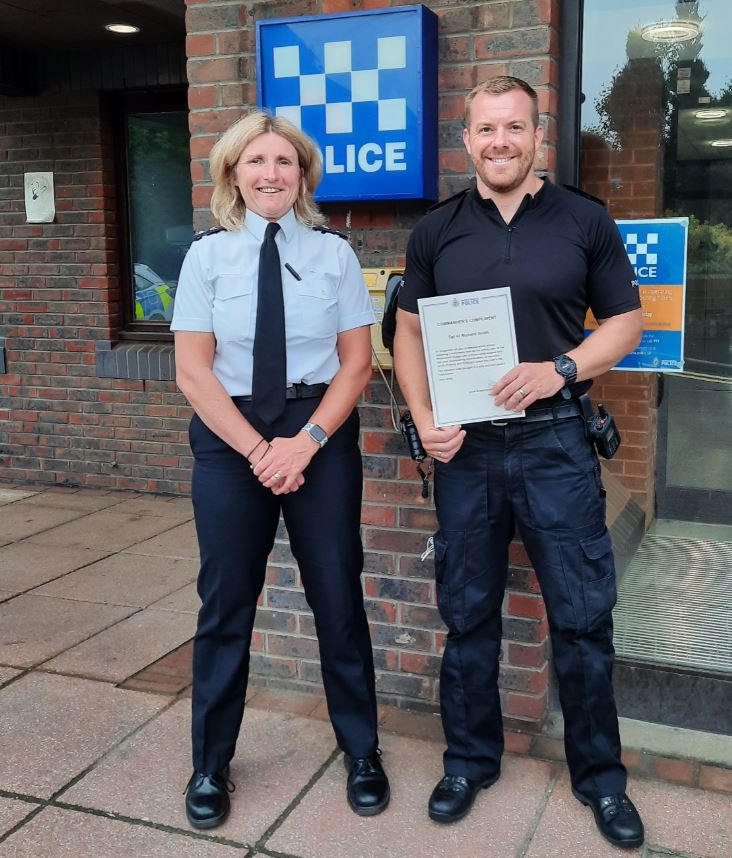 A heroic officer who helped save a vulnerable man’s life after he fell into the River Wear has received a prestigious accolade.

Sergeant Richie Smith was driving over the Wearmouth Bridge in the early hours of June 16 when he saw an intoxicated male on the wrong side of the railings.

Fearing the man may slip and fall into the water, Sgt Smith quickly pulled over and engaged with the man – as well as alerting the Coast Guard and the fire service.

Unsteady on his feet and in a state of distress, moments later the man did lose his balance and fell off the bridge into the river below.

However, despite the near pitch-black conditions, Sgt Smith was able to coordinate the emergency resources and ensure eyes were kept on the male who had started to drift out to sea.

Within minutes, the National Police Air Service (NPAS) and the coast guard were on hand to ably assist – and they successfully lifted the man – who was almost entirely submerged - to safety.

Sgt Smith said: “The most important thing is that the man is OK and that’s thanks to an unbelievable team effort between all the emergency services who went above and beyond.

“I knew that we had to keep eyes on him once he was in the water, and thankfully NPAS were able to track the heat source and direct the coast guard to his exact location.

“I’m delighted that this incident had a positive outcome. I am honoured to receive this award, which I’d like to dedicate to everybody who assisted that night. I couldn’t have done it without you.”

The male – aged in his 30s – was taken to hospital with injuries to his neck where he remains in a stable condition.

Chief Supt Pitt has today extended her thanks to Sgt Smith and believes his intervention helped save the vulnerable man’s life.

She said: “Every day our officers are faced with complex situations which may require them to make important and swift decisions in challenging circumstances.

“I have no doubt that Sgt Smith’s decisions that night helped save this man’s life. After realising he was intoxicated and in a state of distress, he swiftly alerted our blue-light partners and showed outstanding leadership qualities to take control of the situation.

“When the man did slip off the bridge, Sgt Smith was able to expertly coordinate his safe recovery – and I am incredibly proud of the way he responded. He should be very proud of his actions.

“We are indebted to our emergency service partners who continue to play an instrumental role in helping us to protect the most vulnerable in our communities – and this was a wonderful example of how everyone pulled together to achieve a positive outcome."

If you see anybody in distress and are concerned for their welfare, always report it to police by contacting us via the ‘Tell Us Something’ page of our website or by calling 101. In an emergency, ring 999.