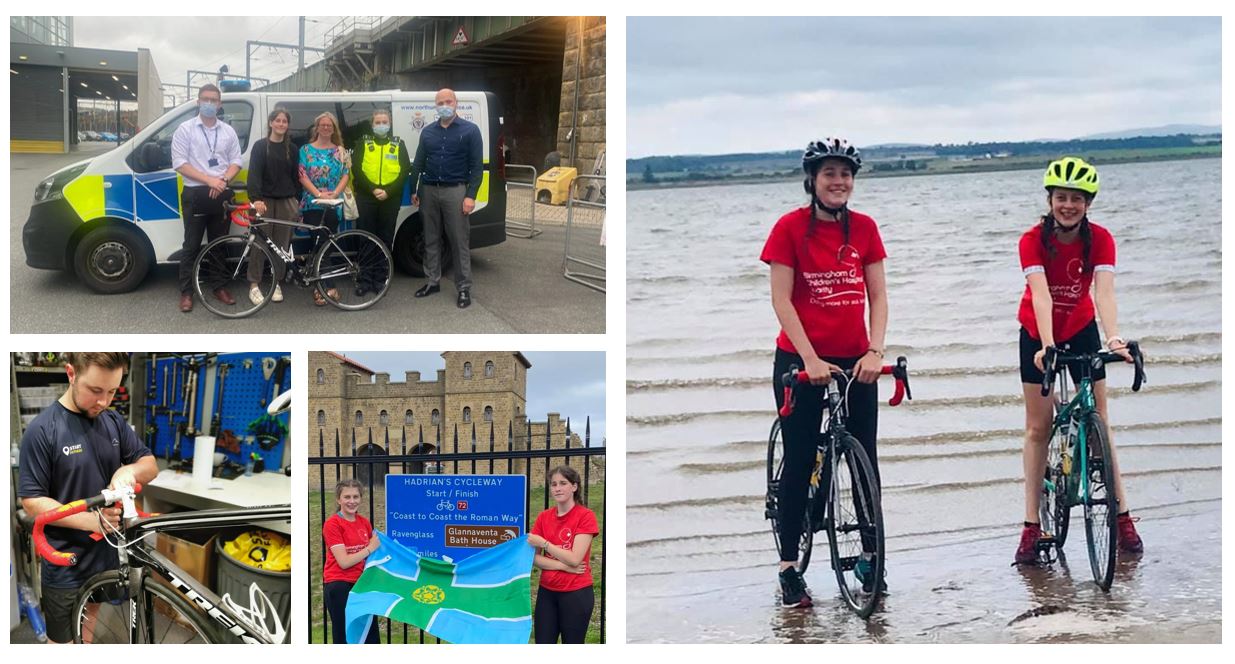 Kind-hearted officers have reunited a teenage girl with her bike after a charity challenge was halted by thieves.

Georgina Slater-Ferguson and friend Phoebe Harrison, both 15, were tackling the Hadrian’s Cycleway coast to coast route between Cumbria and Northumberland last week.

When cycling in the Fell View area of Walker on Thursday (September 2), the girls were approached by a group of teenage boys – with one knocking Georgina off her bike before riding away with it.

Phoebe bravely tried to cycle after him to see where he was heading and police were notified.

Within hours, officers from Forth Banks Police Station in Newcastle had successfully retrieved the bike – and even took it to Start Fitness in the city centre for a full service and repair.

They were then able to return the bike to a thankful Georgina and her mum Wendy before they headed home to East Staffordshire.

Detective Inspector Kevin Ashurst, of Northumbria Police, said: “We were all sad to hear about this incident, especially given the time, energy and passion that Georgina and Phoebe had put into the challenge and all the training beforehand.

“Thankfully, incidents of this nature are extremely rare and we were determined to make sure the fundraisers left knowing what the people in our region are really all about – and that’s being friendly and welcoming.

“Both girls have been amazing throughout, and quite quickly we were able to identify a suspect and follow a trail that led us to retrieving Georgina’s bike.

“We then took it to Start Fitness who worked their magic – free of charge – and made sure Georgina’s trip to the North East ended on a more positive note.

“I’d like to thank everyone who played their part in this, especially Georgina and Phoebe. They have shown maturity throughout and should be very proud of themselves.”

Georgina’s mum Wendy was among a group of supporters who were following the girls’ progress, meeting up with them at regular five-mile intervals along the route.

She revealed that, despite the setback, Georgina and Phoebe completed the two-day charity challenge on foot and has thanked police for their intervention.

Wendy said: “They were obviously upset and tearful but it was a special moment making sure the girls completed the challenge.

“They have waited a year-and-a-half to do this, all in aid of Birmingham Children’s Hospital Charity, and I know a lot of people had sponsored them and waiting for updates.

“I’d like to thank the police for everything they have done since what happened. They have been superb – and to be able to get the bike back for Georgina, I think psychologically that’s a big plus.

“We’re all incredibly proud of the girls for completing the challenge, albeit in different circumstances to what they expected, and they’re now enjoying a much-deserved rest.”

Ahead of the charity challenge, Georgina and Phoebe launched a GoFundMe page in aid of Birmingham Children’s Hospital Charity. You can sponsor them at https://www.gofundme.com/f/georgina-and-phoebes-coast-2-coast-challenge .

Following the incident a teenager was arrested on suspicion of robbery and released on bail, with an investigation ongoing.

Anyone with information or who witnessed the incident is asked to contact police via the ‘Tell Us Something’ page of our website or by calling 101 quoting crime number 096437S/21.