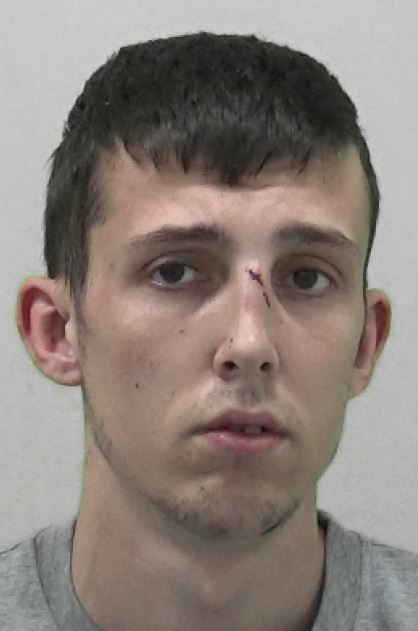 A violent thug who headbutted an officer in a bid to evade arrest has been jailed.

Karl Glendenning is set to spend the next 22 months behind bars after he was spotted brandishing a machete on Ponteland Road on August 16.

The 25- year-old hopped in a taxi on Eastern Way, asking to be dropped at a nearby pub, unaware a concerned member of the public had contacted police to report what they’d seen.

Officers were soon deployed and caught up with the car on Burnfoot Way, but Glendenning demanded the driver speed up and told him not to pull over.

However, the expert tactics of response officers prevailed and the car was soon intercepted and the driver taken to safety.

Glendenning then brandished the machete once more, swinging it in the air and striking the taxi with it before officers from the Force’s Firearms Support Unit deployed their taser on him.

When the Taser proved ineffective, Glendenning then tried to hop back in the car and make off but was detained by officers and arrested.

During the journey back to the station, Glendenning lashed out again, this time head-butting an officer in the chest. Thanks to the swift work of detectives he was subsequently charged with assaulting an emergency worker, affray and possessing a bladed article.

Glendenning, of no fixed abode, appeared at Newcastle Crown Court on Wednesday where he admitted to the reckless and dangerous behaviour and was jailed for 22 months.

Speaking after the hearing, Detective Inspector Paul Young of Northumbria Police said: “Glendenning’s actions were hugely irresponsible and could have caused serious injury. He was reckless and instead of handing himself over to officers when he saw our vehicles approaching, tried to force his taxi driver into a dangerous pursuit.

“I hope this incident shows the public just seriously we deal with reports of weapons being carried on our streets. There is never an acceptable reason to do this, and as a precaution we will always deploy our specialist firearms officers to incident of this nature and ensure any risk to the wider public, as well as our neighbourhood officers is kept to a minimum.

“Our officer has recovered well and thankfully was not seriously harmed by Glendenning. I want to thank him and the rest of the officers for their swift and professional behaviour in a situation which could have easily escalated.

“We will not tolerate this kind of behaviour or violence towards our officers and hope this sentencing serves as warning to anyone who thinks this is acceptable.”

To report suspicious behaviour or activity, use the Tell us Something page on our website.