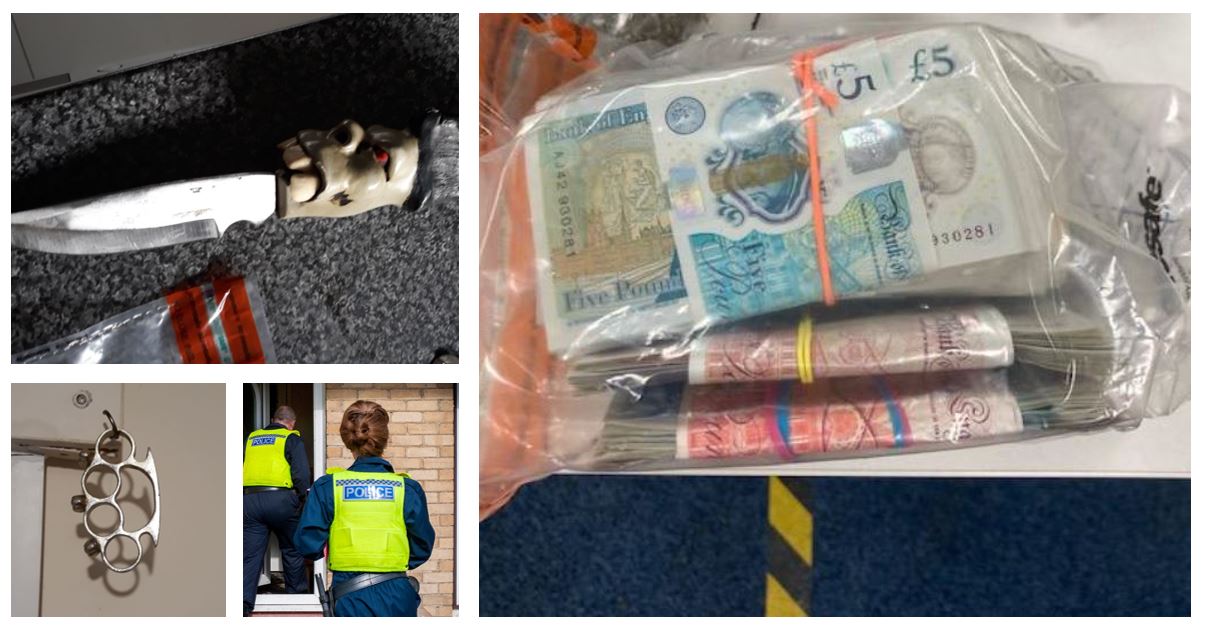 Persistence certainly paid off for determined officers who arrested a suspected drug dealer after a cat and mouse hunt.

After gathering intelligence about an illicit drugs operation believed to be operating from address in the Plains Farm area of Sunderland, last week police planned and executed a warrant.

But with the suspect and his van nowhere to be seen, officers set about finding the vehicle – suspecting they would find crucial evidence inside.

Soon enough, the van was spotted travelling in the Ashington area and had come to a stop in the area of Sandy Bay Holiday Park.

With some neighbourhood support officers (NST) keeping lookout at the Sunderland address, others surprised the suspect by turning up at the front door of the caravan, which was subsequently searched along with the vehicle.

A 40-year-old man was arrested on suspicion of being concerned in the supply of Class B drugs, while quantities of cannabis, a suspected drugs debt list, £5,000 cash, knives, an air gun and knuckle dusters were all seized.

Detective Sergeant Dave Vincent, of Northumbria Police, said: “This was a fantastic piece of work by the NST officers who showed determination and skill to detain a suspected drug dealer.

“When realising their suspect wasn’t at home, they cast their net far and wide in a bid to quickly locate his vehicle and it was soon spotted more than 25 miles away up in Northumberland.

“From there they coordinated searches at the house in Sunderland and the caravan, along with the vehicle, and various items were seized that we suspect to be involved in drug-related criminality.

“Our investigation is ongoing into these discoveries. This proactive activity further highlights our commitment, under the banner of Operation Sentinel, to tackle serious and violent crime across Northumbria.

“By detecting and breaking up suspected drug networks, we can continue to bring effective justice against perpetrators and ensure our region remains a safe place to live and work.”

The man arrested as a result of last Sunday’s strikes (October 24) has since been released under investigation.

Northumbria Police and Crime Commissioner, Kim McGuinness, said: "This shows that Northumbria Police will not give up on catching those believed to be responsible for dealing drugs and moving them around our communities and I am thankful to all officers involved.

"We all want to rid Sunderland of drugs and associated crime and I know Northumbria Police certainly won't be slowing down their fight to tackle these problems and improve the lives of those living in these neighbourhoods.

"My Violence Reduction Unit will also keep up efforts supporting our police with prevention work, stopping people from getting drawn into the world of crime in the first place.”

If you suspect criminality in your area, always report it to police via the ‘Tell Us Something’ page of our website or by calling 101. You can also pass on information via independent charity Crimestoppers anonymously by ringing 0800 555 111.