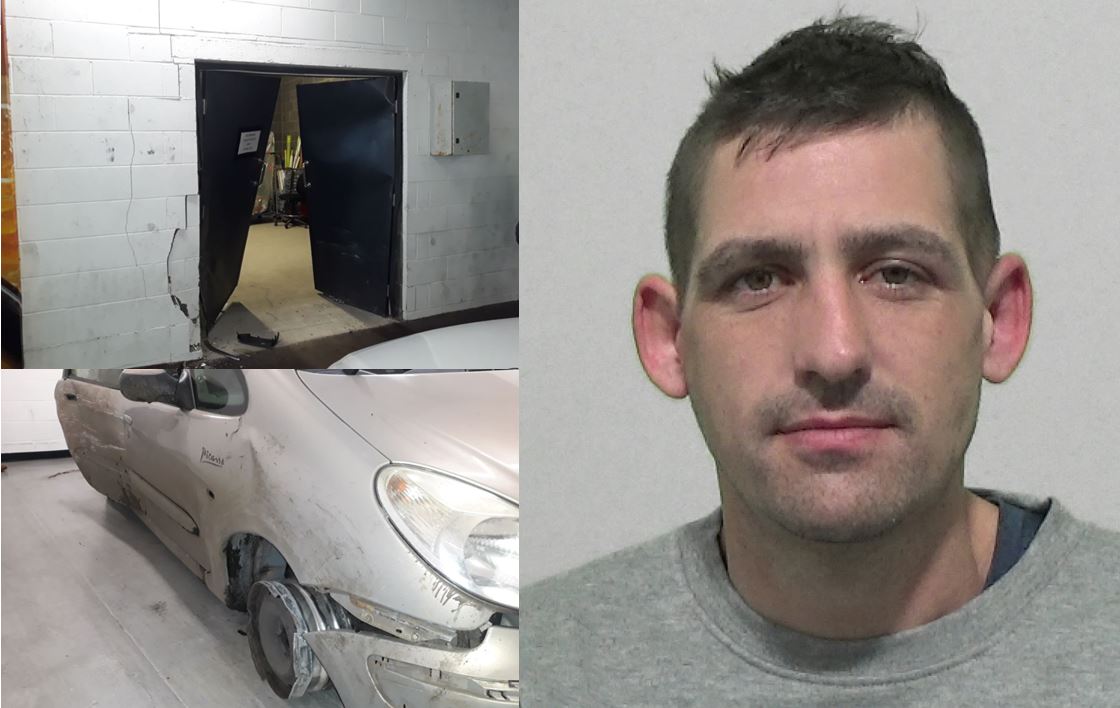 A reckless ram-raider has been jailed after smashing into a Tesco storage unit - before driving off with just two tyres left on his wrecked car.

Gavin Ball caused £15,000 worth of damage after driving a Citroen Picasso through a set of doors at the Sunderland unit in December last year.

The 33-year-old then stole a £1,000 generator and a £10 jerry can which he loaded into his crumpled car, before driving away in the vehicle which had smoke billowing from its bare rims.

With a car door hanging off and pieces falling off the vehicle, it was only a matter of time before banned driver Ball attracted attention – and a police officer in the Roker area raised the alarm after seeing the state of the car.

Ball was subsequently arrested and later charged with burglary, dangerous driving, driving without insurance, possession of a bladed article, failing to provide a specimen and possession of cannabis.

On Tuesday (May 11) he pleaded guilty to all charges and was jailed for two years and four months at Newcastle Crown Court.

Detective Constable Simon Cammack, of Northumbria Police, said: “This was an incredibly brazen crime as Ball repeatedly slammed a car into a Tesco storage unit in a bid to get his hands on valuables.

“His greed resulted in thousands of pounds of damage, and he then had the audacity to get behind the wheel of the wrecked car and drive it two miles – endangering the lives of both himself and other road users.

“He drove the vehicle despite knowing he was disqualified and fully aware that it was significantly damaged, with a door hanging off and smoke billowing from the car which was missing two tyres.

“This type of criminality will not be tolerated and I am pleased that the severity of his crimes have been recognised through this custodial sentence.

“Such mindless and dangerous acts must not go unpunished, and we will continue to take swift and robust action against thieves and burglars who target businesses across the city.”

Officers were able to seize the stolen generator and jerry can which were both found in Ball’s vehicle, as well as a meat cleaver which was located in the boot.

Ball of Tower Street West, Sunderland, now begins a custodial term and was also handed a new two-year road ban which begins when he is released from prison.