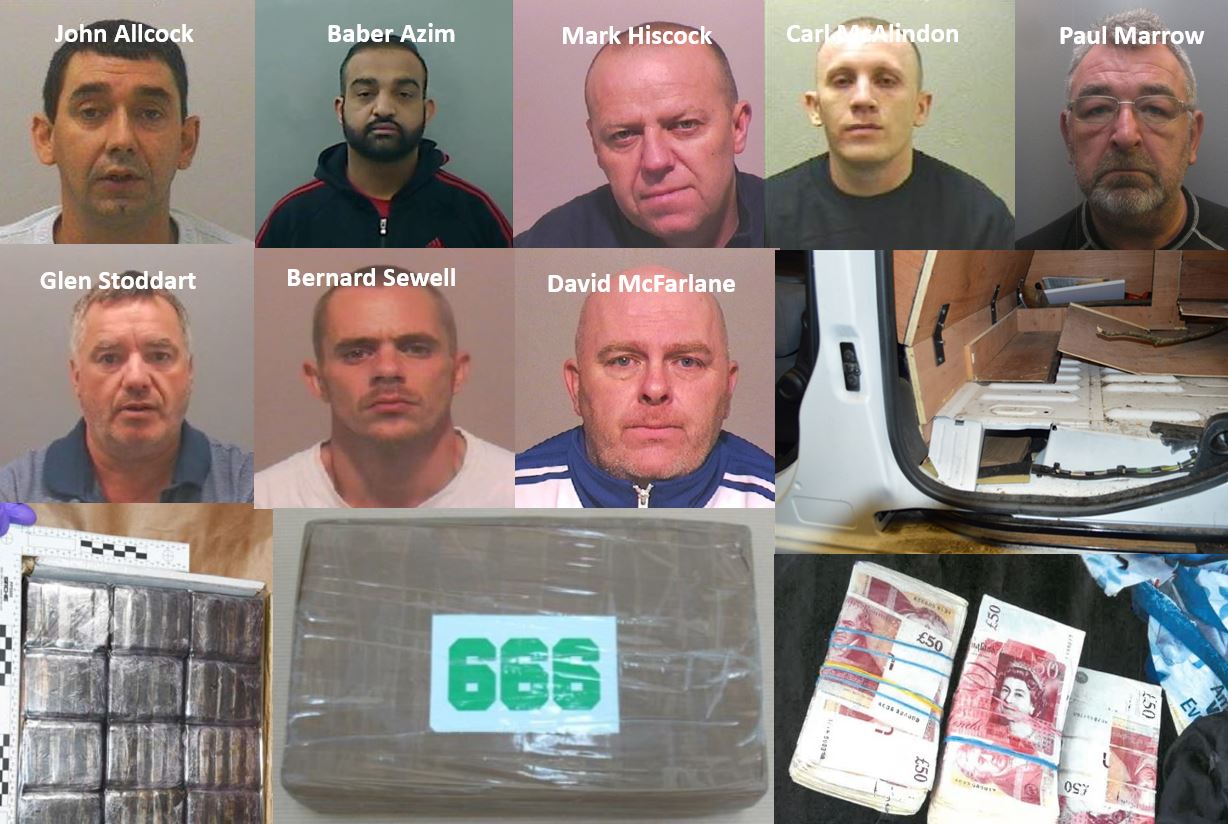 The two final members from a South Tyneside drugs ring have been jailed – bringing the group’s time behind bars to a total of over 61 years.

Paul Marrow and Baber Azim, have joined their six criminal associates and are now behind bars for the roles they played in the shipping of high purity cocaine and amphetamine into the region.

During the 22-week trial, drugs linchpin John Allcock and his cronies repeatedly denied their roles in the conspiracy, which saw detectives monitor and close in on their operation between January 10, 2017 and May 31, 2018.

As part of their activity, officers seized more than £120,000 cash, 65 kilos of cannabis and mixing agents, as well as Class A drugs.

During the complex investigation which was launched by officers from the North East Regional Special Operations Unit (NERSOU), Allcock and his trusted lieutenant Carl McAlindon were monitored as they ran their illicit business, buying and sourcing drugs from members of a North West organised criminal group.

Allcock would regularly travel to Liverpool and Manchester to meet with associates and was observed visiting an industrial unit which the group had access to and suspected to have been used to store large quantities of Amphetamine – which he later bought and employed couriers to distribute across the region.

During their trial, Newcastle Crown Court heard how the men attempted to evade detection by conducting shady face-to-face business meetings, as well as via encrypted devices and also used a number of tactics to try and avoid police detection.

After a lengthy period of surveillance on the group, officers made their first move and arrested Liverpool-based courier Paul Marrow on September 15, 2017 on the A1 in Durham. With the assistance of a drugs dog, a hidden electronically operated compartment complete with a trap door was found inside his white van and contained a block of high purity cocaine worth around £180,000.

Then in November, further enquiries saw the recovery of almost £50,000 in cash after a targeted vehicle stop in Lincolnshire. A search of the van revealed the cash secreted beneath a fixed heavy-duty boot-liner under a pile of tools.

The takedown of the group continued into 2018 when officers arrested two more couriers, Baber Azim and Glen Stoddart. Azim was intercepted as he travelled through the Cleveland Police area in possession of cash and a kilo of cocaine, and Stoddart caught in Swansea having travelled there with £250,000 worth of Cannabis, and later collecting £21,250 in cash.

Allcock, who was residing in Spain, was later arrested with the help of the National Crime Agency in a final swoop by officers determined to bring the conspiracy to an end.

The group of eight were subsequently charged with a string of drugs and money laundering offences and all stood trial at Newcastle Crown Court.

Two pleaded guilty and the remaining six were subsequently convicted in February this year following a four-month trial.

In April, six of the men again appeared at Newcastle Crown Court and today (Tuesday), the last two were handed their sentences and will join their convicted criminal associates behind bars.

Their sentences are as follows:

John Allcock, 52, of Durham was found guilty of Conspiracy to Supply Class A and B drugs and money laundering and was sentenced to 21 years behind bars.

Carl McAlindon, 36, of Jarrow was found guilty of Conspiracy to Supply Class A and B Drugs and money laundering and was sentenced to 13 years behind bars.

Mark Hiscock, 46, of South Shields was found guilty of money laundering but found not guilty of Conspiracy to supply Class B drugs and was sentenced to one year behind bars.

David McFarlane, 53 of Jarrow was found guilty of money laundering but found not guilty of Conspiracy to Supply Class B drugs and was sentenced to one year behind bars.

Glen Stoddart, 53, of Hartlepool was found guilty of conspiracy to supply Class B drugs, money laundering and participating in activities of an Organised Crime Group and was sentenced to five and a half years behind bars.

Paul Marrow, 62, of Liverpool admitted Conspiracy to Supply Class A drugs and was sentenced to 11 years behind bars.

Baber Azim, 43, of Slough admitted Conspiracy to supply Class A drugs and money laundering and was sentenced to a four years and nine months behind bars.

And, Michael Vassallo, 42, of South Shields had been charged with Conspiracy to Supply Class A drugs but was found not guilty by the jury during the trial.

Speaking at the end of the trial Detective Inspector Steve Pescod from NERSOU said: “I hope this case send a strong message to anyone who thinks they can turn a profit from supplying illegal, harmful substances in our towns and cities.

“Allcock ran a sophisticated and significant operation worth millions of pounds, which, thanks to the hard work and dedication of officers has now been shut down, and the proceeds seized.

“Thanks to this investigation, members of two organised crime groups, ranging from couriers to those leading the businesses were brought before the courts and held accountable for their shameless and despicable offending. I am pleased the jury have found them guilty and they have been given substantial jail terms, as these convictions undoubtedly make our region a better place.

“These men were brazen offenders who were working together to maximise profits, without a care for the vulnerable people caught up in their activity. Not only did they hide what they were doing through the use of encrypted phones and swapping sim cards, but also denied their roles before a court and refused to accept blame and take responsibility.

“As part of Operation Sentinel, our dedicated initiative here in the North East which tackles organised crime, officers at NERSOU are working tirelessly alongside their Force counterparts to identify and stop people involved in this type of criminality, and bring them to justice.

“We will continue to work with our partners to disrupt and dismantle those illicit operations seeking to make money from selling drugs, as well as working hard to ensure those caught up in the effects of organised crime are given the help and support they need.

“I would like to take this opportunity to thank all the officers and staff involved in this lengthy investigation and hope their efforts reassure the community that we are committed to tackling organised crime.”