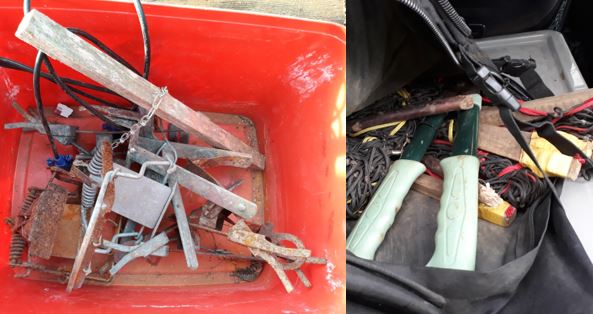 A haul of poaching and hunting equipment has been seized as part of a joint day of action between Northumbria Police and the RSPCA.

On Friday, officers from the Rural Crime Team and Alnwick and Hexham NPT alongside partners from the RSPCA and National Wildlife Crime Unit executed warrants at two addresses, one in Hexham and a second in Longframlington, after receiving intelligence that people at the properties were believed to be involved in hunting badgers and foxes.

The warrants were executed simultaneously, and officers conducted thorough searches of both properties, resulting in a number of electronic devices and animal traps being seized.

Animals living at the property were also given welfare checks by the RSPCA.

The Force’s Wildlife Enforcement Officer, Peter Baker, has welcomed the results of the searches.

He said: “When suspected illegal hunting by individuals living at these addresses and after it was brought to our attention by the Naturewatch Foundation, we joined forces with partners and acted.

“As a result a number of items commonly used by poachers and illegal hunters have been seized while our investigations continue.”

He added: “As a Force we are committed to protecting our area’s wildlife.

“We strongly believe those who mistreat or neglect any animal should be punished and have their day in court. We always encourage anyone with any information regarding the suspected mistreatment of wildlife through hunting, poaching or any other means to get in touch and our dedicated teams will investigate.”

If you suspect wildlife crime to be taking place in your area or are worried about the welfare of an animal, contact Northumbria Police on 101 and quote Operation Hawkeye.