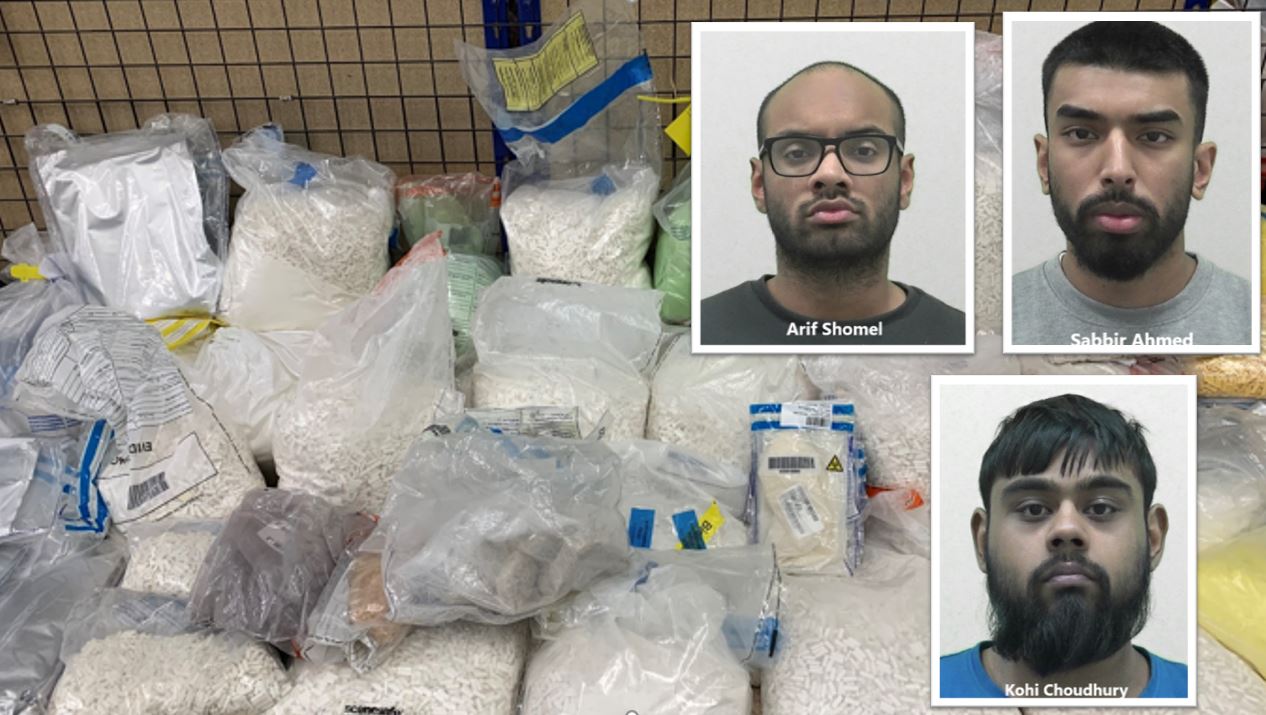 Kohi Choudhury, Sabir Ahmed, and Arif Shomel have been jailed for their roles in a conspiracy which saw police seize £29,000 worth of class A drugs back in July 2021.

The complex investigation first began in October 2020, after police received intelligence which suggested illicit packages were being sent across the Atlantic.

After two packages were intercepted, an investigation was launched led by the North East Regional Organised Crime Unit (NEROCU), and assisted by Northumbria Police, Border Force and the National Crime Agency (NCA).

This led police to an address in Stanton Street, Newcastle, where a sophisticated drugs production facility was uncovered. Over 80 kilos of Class C drugs were recovered along with industrial pill presses and other machinery needed to produce, package and dispatch these tablets.

And it wasn’t long before forensic investigators were led straight to ringleader Choudhury. The 26-year-old was subsequently arrested released while the enquiries into the conspiracy continued.

This new information led to more searches at two further addresses in Newcastle.

On July 12 2021, Choudhury was re-arrested at his home on St Thomas Square on suspicion of being concerned in offer to supply controlled drugs and his devices, a small quantity of tablets and £12,000 in cash seized.

The second address on Lancaster Street revealed another sophisticated drugs lab complete with a large industrial pill press, capable of producing up to 5000 high-quality pills an hour, mixer, grinder and packaging equipment.

It was here detectives seized 40,000 tablets and bulking-agents and two kilos of crystallised MDMA and ecstasy tablets with a street value of £29,000.

Choudhury and his co-accused Shomel, 25, and Ahmed, 25, who had been previously arrested during the course of the investigation, were all subsequently charged with a range of drugs offences.

His associates Arif Shomel, of Bentinck Road, Newcastle and Sabir Ahmed, of Angel View Benwell, both pleaded guilty to of conspiring to supply a Class C drug and supplying a psychoactive substance.

Today (Wednesday), they appeared before the same court and received the following sentences:

Choudhury was sentenced to 14 years in prison as the lead in the operation and will receive a three-year Serious Crime Prevention Order upon his release.

Ahmed was sentenced to three years and six months behind bars and Shomel received two years jail time for their role in the drugs conspiracy.

Speaking after the trial, Detective Sergeant Hayley Turner-Douglass, from NEROCU said: “This was a very complex investigation into the large-scale supply and distribution of illicit drugs, spanning two continents and multiple law-enforcement agencies and I am pleased the jury saw through the lies and excuses.

“Thanks to excellent partnership working between law enforcement agencies including officers and staff from Northumbria Police, the National Crime Agency (NCA), UK Border Force, The Crown Prosecution Service (CPS) and with the support from the National County Lines Coordination Centre we were able to dismantle this international drugs line.

“Through hard work and information sharing between partners we were able put three drug dealers before the courts bringing an end to a sophisticated operation which was making harmful substances on an industrial scale resulting in thousands of pounds in profit.

“The group attempted to hide their criminality behind false identities, legitimate companies and innocent individuals however the investigation team were able to see through this web of deceit.”

“Working in collaboration with internal and external partners and information sharing shows how effective we are able to tackle serious organised crime enabling us to put three drug dealers before the courts bringing an end to a sophisticated operation which was making thousands of pounds in profit by selling illegal and harmful substances on an industrial scale.

“Criminality like this has no place in our communities and we will make no apologies for our continued clampdown on anyone involved in this type of activity.

“Cocktails of drugs made by unauthorised, unqualified people like Choudhury can pose a serious risk to anyone who takes it. We urge people never to buy drugs online or from the dark web.

“We will continue to tackle the illegal supply of drugs and dismantle the criminal organisations who supply them as part of our dedicated initiative Operation Sentinel.”

Anyone who suspects drug misuse or supply in their area is asked to report it to police via the ‘Tell Us Something’ page of our website or by calling 101. Alternatively, you can ring independent charity Crimestoppers anonymously on 0800 555 111.