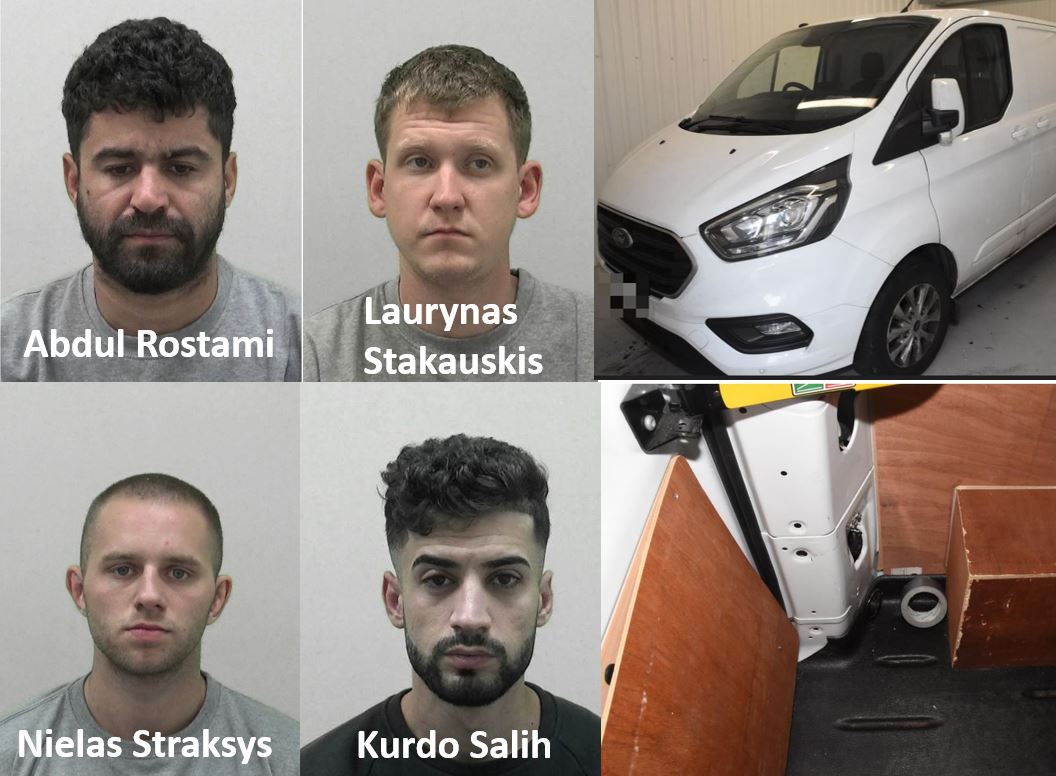 A group of thugs who kidnapped a man and left him outside a luxury hotel have been jailed for a combined total of 32 years.

Abdul Rostami and Nielas Straksys entered guilty pleas to charges of robbery and kidnap almost three weeks into their trial at Newcastle Crown Court – just weeks after their associates Laurynas Stakauskis and Kurdo Salih, were found unanimously guilty by a jury at the same court.

The jury heard how the quartet had tried to carefully coordinate a pre-planned attack, travelling from Ipswich to Gateshead to settle a debt over counterfeit cigarettes.

As part of the sinister plot, the men followed their victim as he walked to work on the morning of July 3 last year – unaware of what was about to happen when a white van pulled up alongside him.

The 31-year-old was assaulted and thrown into the vehicle, where the group beat him and threatened to kill him and his family.

The terrified victim would later be left at Ramside Hall Hotel after his kidnappers returned to his home address and stole £9,000 from him.

When members of the public found him on site, his hands and feet had been bound with gaffer tape and he was blindfolded.

The incident was reported to Durham Constabulary, who immediately contacted officers from Northumbria and an investigation was launched into the ordeal.

It wasn’t long before police traced the van and it was intercepted it on the A1 Southbound in North Yorkshire, and three occupants, Rostami, Straksys and Stakauskis were detained.

After the men were taken into custody, the van was searched and police found a Tesco receipt showing they had bought latex gloves and tape prior to the offence. A scan of the store’s CCTV identified the suspects and allowed detectives to plot their movements in the build up to the kidnap.

The fourth man, Kurdo Salih was then later arrested in Ipswich and the group charged with kidnap and robbery.

And on July 18, the group appeared back at Newcastle Crown Court where they were jailed as follows:

Speaking after the sentencing Detective Sergeant Matthew Murray, the officer in charge of the case, said: “This was a horrendous ordeal for the victim, something he never thought possible, and I have no doubt this incident will stay with him for a long time.

“I want to take this opportunity to thank him for his bravery and cooperation throughout these proceedings, which will no doubt have brought back some difficult memories.  I would also like to thank the jury and our partners in the criminal justice system for the sentences handed down today which reflect the severity of the case.

“The actions of these men were abhorrent to put it simply. Brazen, arrogant, and greedy. They were cold and calculated and planned every detail from hiring a van to buying gloves and then travelling more than 280 miles to carry out an act of revenge.

“Thankfully a number of witnesses offered assistance to the victim and contacted police, which enabled us to quickly launch an investigation and swiftly make arrests. Thanks to those Good Samaritan witnesses, our partners at Durham Constabulary, and all the officers and staff involved in this investigation, a group of dangerous men are no longer on the streets.

“We will not tolerate criminality of this kind, and anyone who thinks this is acceptable behaviour has no place in our communities. Under the banner of Operation Sentinel we will continue to tackle serious and organised criminality ”

If a crime is taking place, always dial 999.

To report suspicious behaviour, use the Tell us Something page on our website.