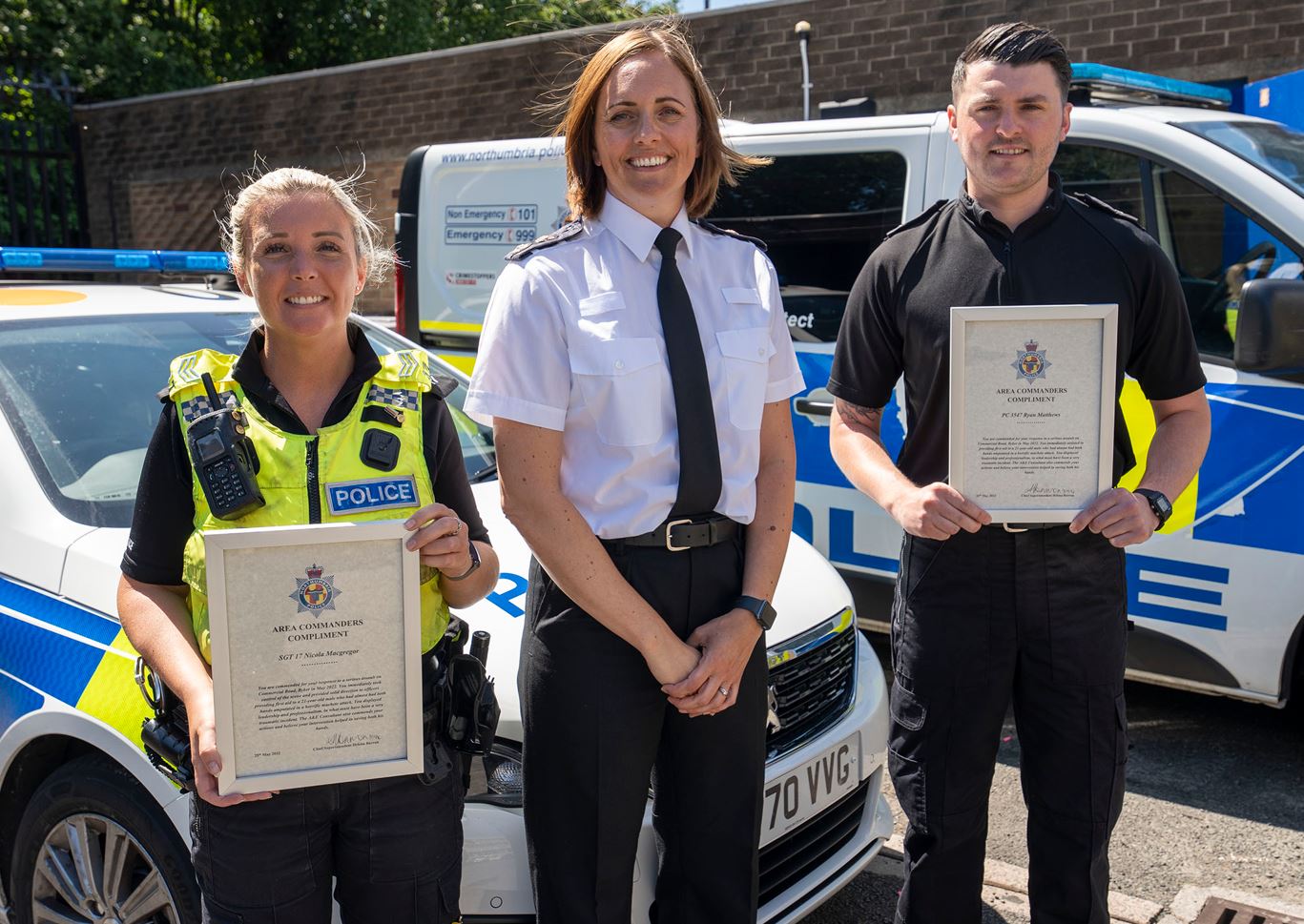 Heroic officers who administered first-aid to a critically injured man have been praised for helping to save his life.

On Friday, May 13, police were called out to St Peter’s Road in Newcastle after receiving a report a man had sustained serious injuries after being attacked with a machete.

Response officers were on the scene within two minutes of the initial call being taken, and soon found the victim, a 21-year-old man, with deep cuts to both hands and arms, bleeding heavily.

They immediately began administering first-aid until an ambulance arrived at the scene, and the victim was blue-lighted to hospital for emergency surgery.

Following the victim’s recovery, the senior hospital consultant praised the immediate response of officers, saying their actions were likely to have saved the man’s hand and potentially his life.

Speaking at the presentation she said: “The lengths our officers will go to in order to help people never fails to impress me, and the effort, passion and dedication of all those who attended this incident has blown me away.

“Not only were the responding officers on scene within minutes, but they were able to stay calm while dealing with a seriously injured man and administer first aid. Those actions, according to the senior consultant, were potentially life saving and stopped a young man from losing his hand.

“As well as carrying out this vital role, officers also secured the crime scene, coordinated the response of their teams, and secured evidence for the investigation.

“Officers often carry out extraordinary acts of service while on duty and it’s only right we recognise those efforts. It’s also important we show the public just how committed the officers working in their communities are.”

Ch Supt Barron added: “We wish the victim in the case a speedy recovery and hope he is back to full health as soon as possible.

“I want to reiterate the message that we do not tolerate violence of any kind across our communities and will take firm action those involved and those found to be carrying weapons.”

Sergeant Nicola Macgregor, who was one of those in attendance and received a Ch Supt’s compliment said: “When I arrived on scene, there were two other officers in attendance carrying out first-aid on some of the most serious injuries I have seen in my 12 years as an officer.

“By working as a team, we were able to make sure the victim was cared for and given the treatment he needed, while helping colleagues to seize evidence and ensure we could progress any enquiries.

“I think I can speak for most of my colleagues when I say we don’t come to work for praise but I am so pleased our efforts that night have been recognised and am happy to know we have made a difference to someone’s life.”

The investigation into the incident remains ongoing, and anyone with information is asked to contact police using the online reporting tool, quoting crime reference 056090F/22.

Do you think you have what it takes to help your community and make a difference? Why not take a look at our careers website and see if joining #TeamNP is for you?