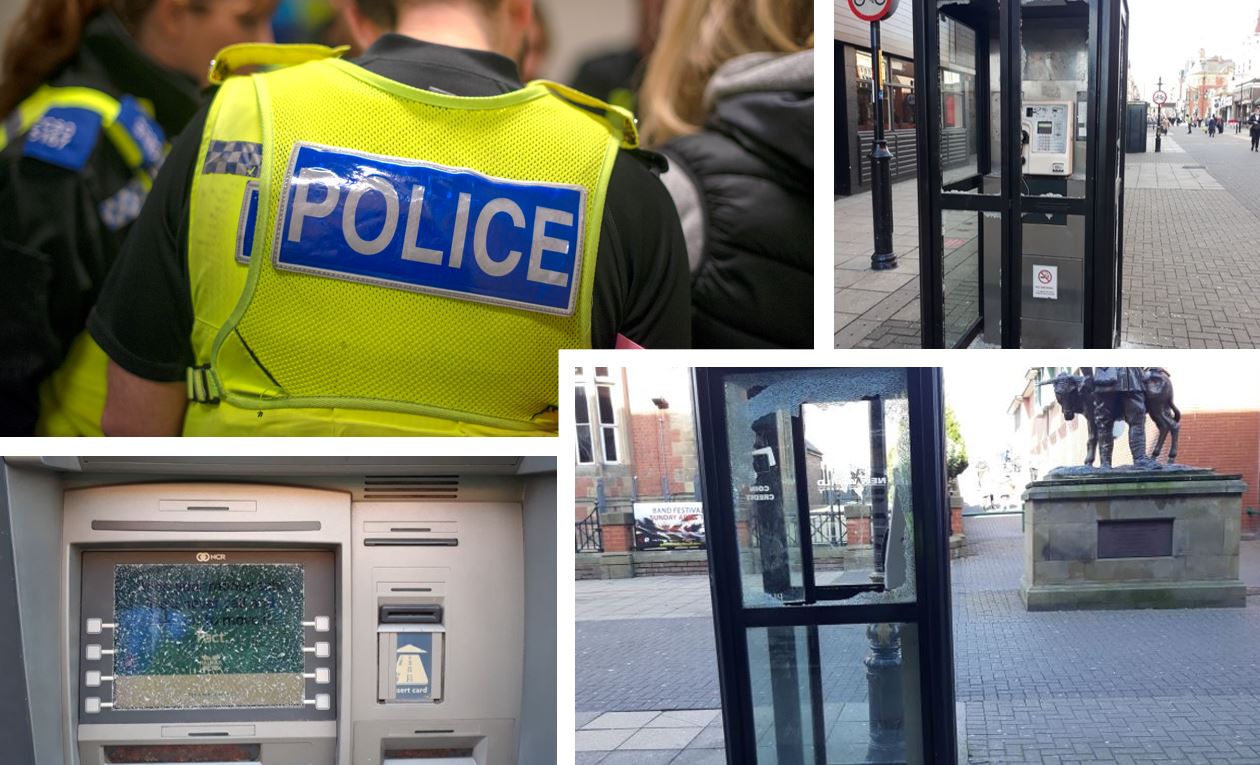 Anti-social behaviour has almost halved in South Shields as officers continue to reap the rewards following a coordinated crackdown.

In February this year, officers were made aware of a spate of disorder, vandalism and criminal damage caused by young people in the town centre, as well as at South Shields Interchange and Chichester Metro station.

The offences included various phone boxes and ATM machines being smashed, while a group of teenagers were reported to be causing disorder both in the town centre and at local transport hubs, especially during half term.

In response to the spike, neighbourhood officers launched Operation Capri with the support of South Tyneside Council and Nexus in a bid to identify those responsible and crack down on further incidents through high-visibility patrols and targeted action.

Since then, six suspects aged between 13 and 15 have been arrested on suspicion of criminal damage and vandalism offences, with enquiries ongoing. Officers also teamed up with businesses, the local authority and transport companies to tackle hotspot areas leading up to and during the Easter holidays.

And the operation has today been hailed as a resounding success with youth-related anti-social behaviour in the hardest-hit areas of the town having plummeted by 47 per cent.

Chief Inspector Neil Hall, of Northumbria Police, said: “The overwhelming majority of young people are an absolute credit to themselves and the local area, but we know the anti-social behaviour of a small few can have a significant effect on the communities we serve.

“The behaviour of a small number of offenders during February half term was totally unacceptable, and that’s why it was imperative we launched a coordinated operation to combat this disorder and ensure it did not happen again.

“Since then, with the support of the council, businesses and Nexus, we have been able to identify a number of ringleaders suspected to have been behind the damage – and we are committed to ensuring anyone involved is dealt with appropriately.

“What we have seen since the launch of Operation Capri is incredibly encouraging. Working with partners and the public is crucial to effectively tackling anti-social behaviour – and I am delighted with the progress that has already been achieved.

"However, we won’t rest on our laurels and will be looking to maintain this positive momentum over the coming weeks and months.”

Before Operation Capri, between February 11 and February 26, officers received more than 60 incidents of youth-related anti-social behaviour and criminal damage in the hardest-hit areas of South Shields.

But that number fell to just over 30 during the same two-week period which covered the Easter holidays and Bank Holiday weekend.

Anti-social behaviour generally in the town has also decreased - with reports dropping by 20 per cent and 14 per cent in March and April respectively compared to February before the operation was launched.

As part of ongoing enquiries into the spate of offences, a 14-year-old male has been charged with criminal damage and will appear in court later this month.  A 13-year-old male and a 15-year-old female have received a conditional caution, while three other suspects remain under investigation.

Councillor Ernest Gibson, Lead Member for Area Management and Community Safety at South Tyneside Council, said: “We know that most of our young people are respectful of their communities. However, there is still a small minority that act in an anti-social manner, causing disruption and damage.

“The reckless destruction of the town centre in February was particularly concerning and we are delighted to see that the collaborative work across the Borough has prevented a reoccurrence of this sort of criminal behaviour.

“The fall in incidents is extremely positive news. However, we are not complacent and will continue to work closely with our community safety partners to crackdown on anti-social behaviour across South Tyneside.”

Customer Services Director at Nexus, Huw Lewis, added: “It is good to see the success of Operation Capri in South Tyneside, and our customers can be assured that hard work will continue to deal with this problem in all areas of our network.

“Anti-social behaviour is a problem that goes wider than just Metro. It is affecting the whole community in many different areas and sometimes the problem drifts on to Metro. It is a minority of people spoiling it for a law-abiding majority.

“Nexus expects to spend £1.5million on a dedicated security team to deter troublemakers, and we have invested £4 million in new and improved CCTV across the network. Every year we see in the region of 16,000 young people across hundreds of local schools to promote safety and good behaviour.

“We will never accept any level of anti-social behaviour on Metro and we continue to work closely with the police and our local authority partners to prevent and eradicate this behaviour.

“Anyone who causes trouble on the Tyne and Wear Metro faces prosecution, heavy fines, and even a ban from the network.”

If you are the victim of anti-social behaviour or have any concerns in your area, always report it via the ‘Tell Us Something’ page of our website or by calling 101. In an emergency, or if a crime is taking place, always ring 999.