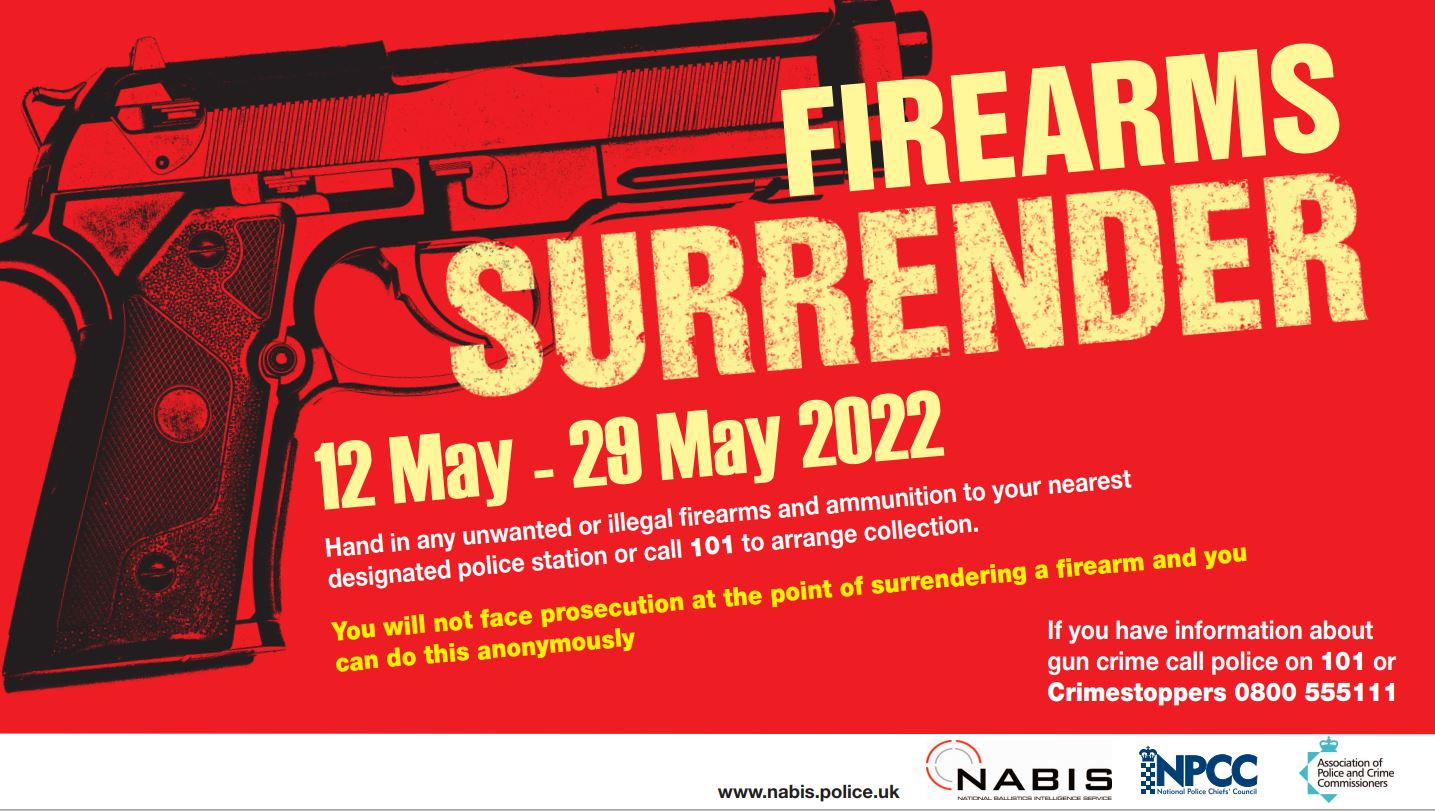 Officers across the country are encouraging people to handover firearms as part of a national surrender starting today (Thursday).

Known as Operation Aztec, the two-week surrender is taking place across England, Scotland and Wales, and aims to encourage people to hand in firearms and ammunition to their local police force.

Many firearms are held in innocence and ignorance of their illegality or are overlooked and forgotten in people’s homes. Some are held legally and are no longer required. Others are acquired and distributed by criminal networks to harm, threaten and intimidate their local communities. The surrender gives people the chance to dispose of firearms or ammunition by simply taking them to a local police station and handing them over.

Surrendering unwanted, unlicensed and illegal firearms avoids the risk of them becoming involved in criminality and means that members of the community can dispose of them in a safe place.

The surrender runs until May 29 and during the period, those surrendering firearms will not face prosecution for the illegal possession at the point of surrender and can remain anonymous.

The last surrender in 2019 saw 54 firearms surrendered along with a quantity of ammunition. The weapons recovered included 16 shotguns, 11 air rifles, 10 air pistols and three revolvers.

Once handed in, weapons will be forensically examined and then either destroyed or given to museums and exhibitions.

Superintendent David Pickett, from Northumbria Police, is leading on the surrender and said protecting the communities we serve is one of utmost priority.

He said: “While incidents involving firearms are rare in our area, we recognise the impact these types of offences can have on our communities and when they do occur we are committed to using every tactic at our disposal to bring offenders to justice.

“Where we can we want to prevent offences from occurring in the first place, and this national initiative can help achieve that – by giving people the chance to dispose of firearms in a safe way.

“One firearm handed in is one less that could potentially be used to harm or threaten our communities.

“If you have a firearm, now is your chance to dispose of it safely, or if you know of one being kept illegally please tell us so we can take action – you could help save a life.”

He added: “This firearms surrender is very much an extension of the work which goes on throughout the year to protect the communities we are privileged to serve.

“Our work alongside partners to safeguard and educate the public and disrupt serious and organised criminality is ongoing.

“Together we can all help ensure that the North East remains one of the safest places in the country to live, work and visit.”

Weapons can be handed into the following stations: Southwick, Forth Banks and Middle Engine Lane. Visit our website for opening hours and further information on the surrender.

If you know of anyone involved with illegal firearms call police on 101 or the independent charity Crimestoppers anonymously on 0800 555 111.

If you are a licensed firearm holder who wants advice, please contact your local force. For more information about NABIS visit www.nabis.police.uk

A firearms surrender - as opposed to a firearms amnesty - means that people can hand in guns they should not have without being prosecuted for firearms possession (i.e. at the point of surrender). The surrender does not give an amnesty for the life of the weapon. Previous offences linked to the firearm will be investigated. During the surrender we want people to hand in:

If you have a gun that falls into any of these categories, we urge you to use this opportunity to hand it in.

Weapons can be handed in at the following police station:

If someone is unable to travel to these stations or have concerns about transporting a firearm to a police station they should contact police via 101 and arrange for the firearm to be collected.

Firearms should ideally be secured in an opaque box or strong bag and any ammunition in a separate box or bag. Never attempt to take an uncovered weapon out in public.