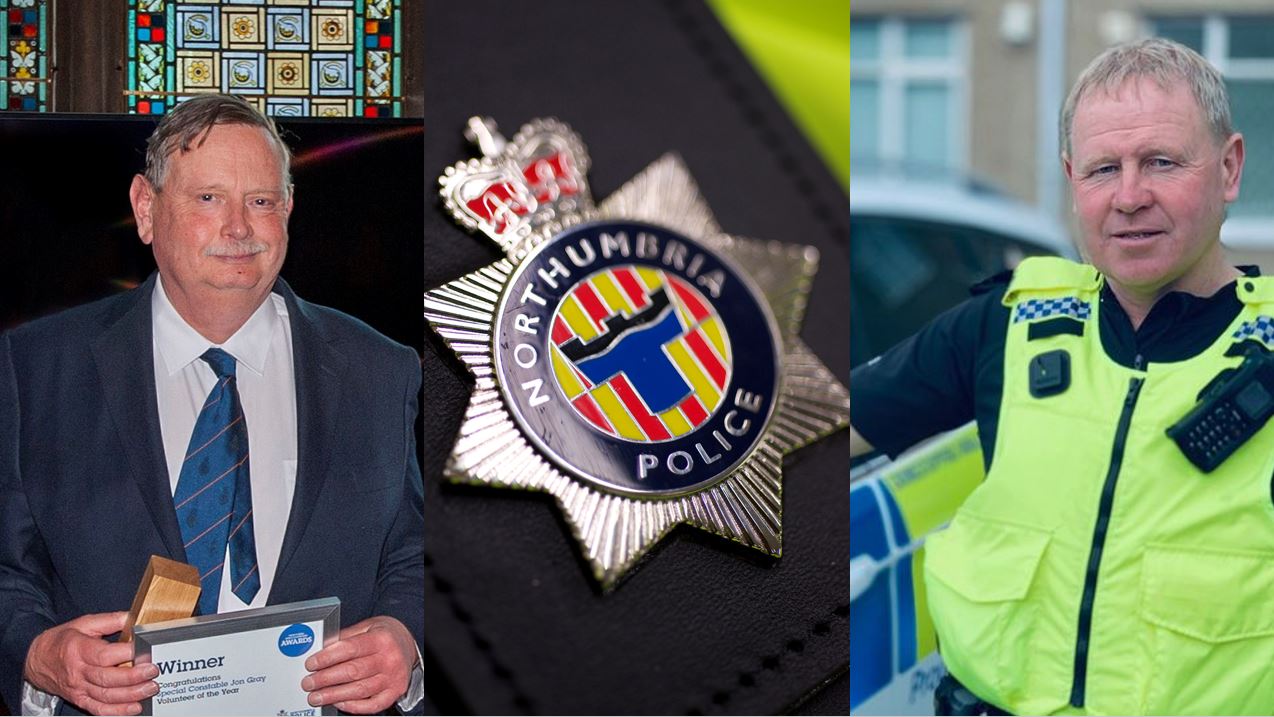 Two of Northumbria Police’s long-serving volunteers have been formally recognised in the Queen’s Birthday Honours list.

Special Constables Michael Scott and Jon Gray have both become Medallists of the Order of the British Empire (BEM) in recognition of their service to policing.

Farmer Michael joined the Force in 1983 and has served the communities of Tynedale and Redesdale  as a selfless volunteer for nearly four decades.

He is self-employed working in agriculture, looking after livestock, farming his sheep, shearing and other aspects of farming life.

But his devotion to his community and his desire to give back to the local area also sees him volunteer as a Special, giving up hundreds of hours every single year to support the Force.

It’s a similar story for former PC Gray, who joined the Force in 1978 and was stationed in Gateshead before making the move to rural Northumberland.

He retired in June 2008 after 30 years’ service, but with much still to give, he started volunteering as a Special just two days later – and has served the community of Ponteland ever since.

He also still finds time to volunteer in the 102nd Battalion, the Royal Electrical and Mechanical Engineers Reserves Pipe Band, where he plays as a drummer. The band play regularly raising money at charitable events.

After being notified of their British Empire Medals, both men admit they have been “blown away” by the recognition.

Michael, 61, said: “Words can’t describe how honoured I am to be recognised in this way. It’s even more special given that it’s our Queen’s Platinum Jubilee – I’m absolutely delighted.

“When I first joined Northumbria Police as a volunteer, I wanted to do something else other than my every day work to contribute a little bit of my time helping others and to try to make a difference.  After all these years I would like to think I have.

“I am so lucky to be patrolling in such a beautiful part of Northumberland, I can’t think of a better place to work.

“I work alongside our new rural crime volunteers who are making a difference in the countryside, and all the other emergency services who do a fantastic job.

“My police colleagues who I have stood shoulder to shoulder with over the years, sometimes in some very sad and tricky situations, I admire and respect every single one of them for the job they do keeping us safe every day. It is a privilege to work alongside them.”

Jon, 64, who has often worked up to 20 hours every week in his role as Special, said: “Having been posted in Ponteland since 1990 I do this duty out of a sense of loyalty to the service and the area.

“I’m pleased to continue to serve the community of Ponteland, which I know well.

“I still assist full-time officers and I’d like to think I help new recruits. This recognition is humbling and I was very surprised to get the call.

“I often think my career has been similar to the film Forrest Gump, I never had anything planned but I’ve been fortunate to work in a number of roles and have landed on my feet.

“I feel fortunate to have had the experiences through policing that I’ve had.”

He said: “I congratulate both Michael and Jon on being recognised in the Queen’s Birthday Honours.

“This thoroughly deserved honour is a true recognition of the unwavering commitment they have demonstrated, over many years, to their communities.

“I would like to take this opportunity to thank them both, as well as extending those thanks to all of our volunteers; all of whom give so freely of their time to the benefit of their communities and in doing so help ensure the North East continues to be such a safe place to live, work and visit.”

He added: “I would also like to remind like-minded people that recruitment is now open, for both paid officers and volunteer Special Constables to join Northumbria Police – if you too feel you could make a real difference to people’s lives then a role in policing could be for you.

“I strongly encourage anyone who feels passionate about their community, policing and public service to apply.

“If successful, you will be joining a dedicated team who are determined to provide the very best service possible to the region we are so privileged to be a part of here in the North East.”

If you feel inspired to join Northumbria Police, visit our careers website to find out more.