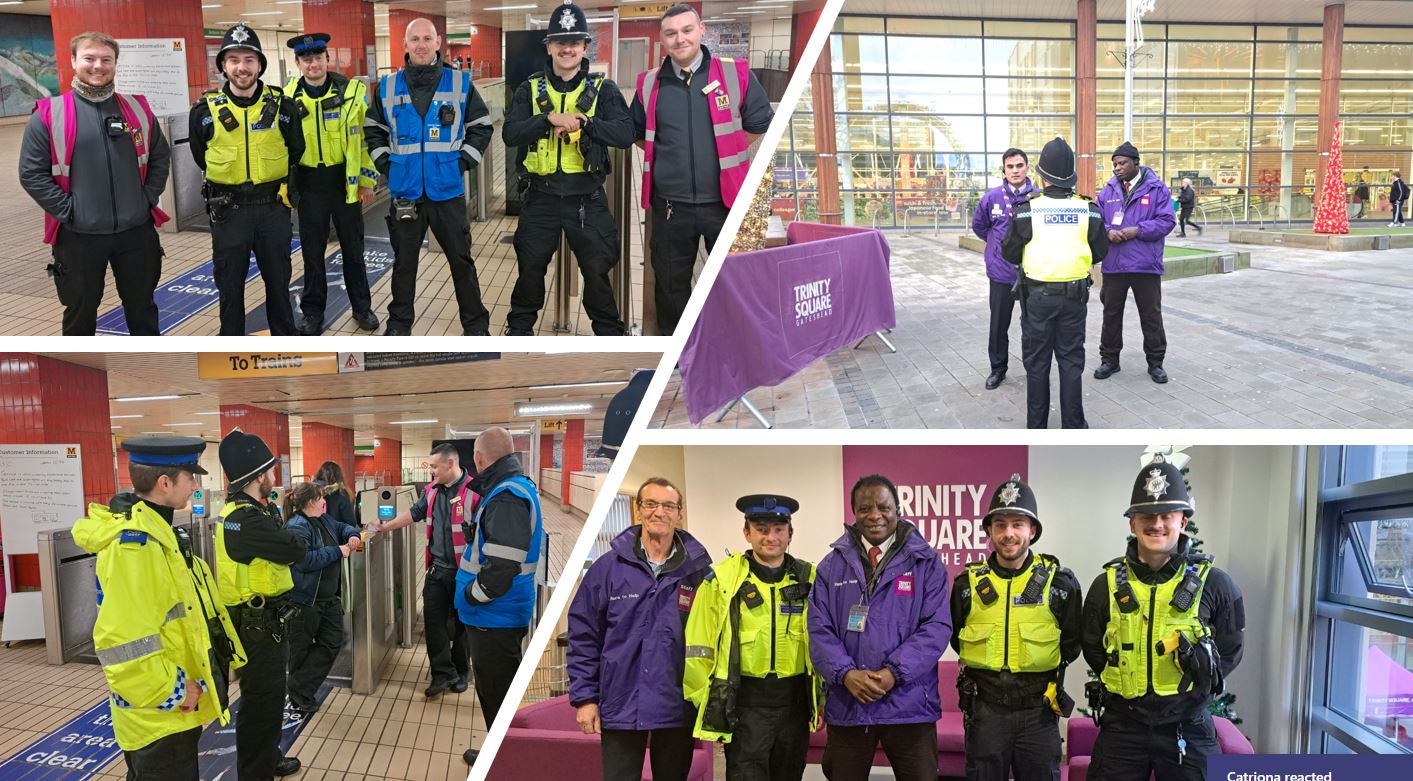 Working hard to keep our communities on the right track.

Dedicated officers have stepped up their activity to tackle antisocial behaviour and disorder across our town centres and transport hubs – with help from their partners.

On Friday, uniformed officers from Northumbria Police’s Neighbourhood Team and Operations Department stepped out with partners from Nexus, operator of the Tyne and Wear Metro, and Trinity Square to carry out additional patrols and ride the rails between Gateshead Interchange and Pelaw Metro Stations.

Taking place from 2pm to 10pm, the activity saw the team engage with shoppers in and around Trinity Square, as well as passengers and commuters - listening to concerns and feedback as well as monitoring the area for any antisocial and suspicious activity as well as escalating behaviour.

The activity, which was funded by the Violence Reduction Unit and co-ordinated with the help of Gateshead Council, will run for eight weeks and aims to help reduce crime and prevent disorder.

Praising the partnership approach to tackling disorder, and ensuring public spaces thrive, Neighbourhood Inspector Kevin Ashurst of Northumbria Police said: “Gateshead town centre is a bustling hub with many commuters and visitors passing through every day. It’s vital they are able to go about their business safely and in the knowledge that should they need us, we’re there.

“These patrols are an extension of the activity we regularly carry out, but they see us working in a more targeted and visible way, at those busy times when the public need us most - and with the added bonus of our partners accompanying us and sharing their expertise.

“While it’s only a small majority of people who cause disorder in our transport hubs and towns, we know that it can have a significant knock-on effect to those using the services and spending time in those affected places.

“This is why we will continue to have extra officers in and around Gateshead town centre throughout these coming winter months – so they can tackle disorder head-on listen to any concerns people might have.”

Northumbria Police and Crime Commissioner, Kim McGuinness, said: “Thanks to the success over the summer, we know that this targeted action does work. However, stopping there was not an option. We need to continue engaging young people and identifying those causing serious disruption in our communities – we will not tolerate their harmful behaviour. That’s why the Violence Reduction Unit have invested further in this crucial work. We need to understand the underlying causes and work with these individuals to deter them from crime – and for those who do not engage in our interventions, there are likely to be consequences.”

She added: “No-one should ever become a victim of crime but sadly we know that it does happen – that's why the more we work together and invest in prevention, the stronger our position will be in the fight against crime."

Metro Operations Director, John Alexander, said: “We continue to work in co-operation with the police and other stakeholders to deal with anti-social behaviour when it occurs on Metro.

“These extra patrols will be of great reassurance to the law-abiding majority of people who pay for their travel and don’t want to put up with a minority who cause trouble.

“The extra policing and other measures we have put in place has helped to halve the levels of anti-social behaviour on Metro since the spring.

“Not only does Nexus invest in policing on Metro, we are also putting £3m into a security team to patrol the network on a permanent basis. We have invested £4m in improved CCTV, and all of our frontline staff wear body cameras.

“Anyone who causes trouble on Metro is likely to get caught and face prosecution, fines, and even a possible ban from using the system.”

To report suspicious behaviour, please use the Tell us Something page on our website.