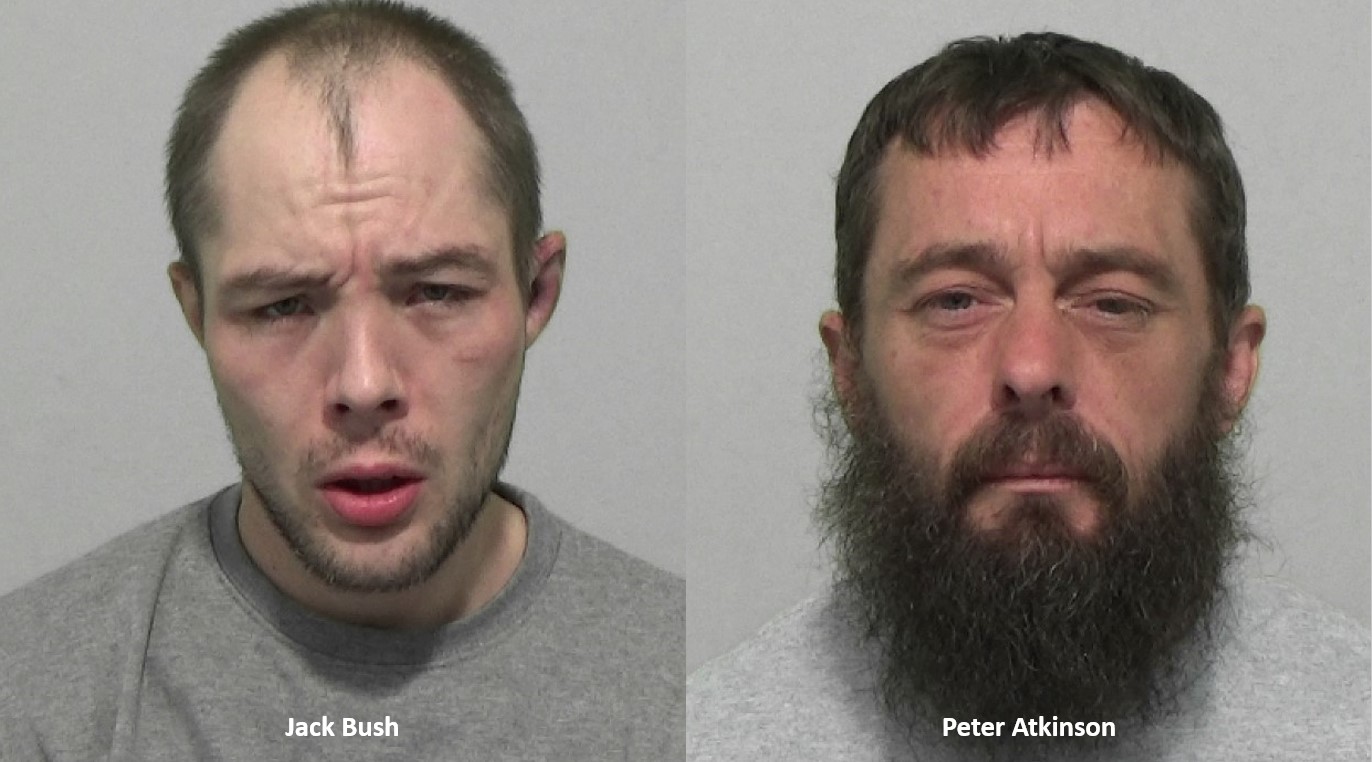 Two shameless burglars who were caught rifling through their haul after crashing a stolen car have been locked up for more than seven years combined.

Luck soon ran out for Peter Hughes Atkinson, 40, and Jack Bush, 32, who were arrested and charged within a few short hours of targeting three Jarrow properties in an overnight crime-spree.

It all started when officers were made aware of suspicious activity taking place at three houses in the early hours of June 25.

At around 1.30am, it was reported that an occupant had found the front bedroom of their home on Pine Street in a state of disarray. A number of items were reported as missing including a mobile phone, bank card and a wooden drawer containing various items of jewellery and watches.

Shortly after 3am, it was reported that intruders had gained entry to a property on Gloucester Way. When confronted by the occupants, the suspect fled the scene on foot. A number of items were reported missing including jewellery of sentimental value.

Then, shortly before 6am, it was reported that a suspect had gained entry to a property on The Crescent, taking car keys and driving off in a Nissan Juke that was parked outside on the drive. Other items missing included electronics of high value.

Detectives immediately launched an investigation and started to carry out enquiries to locate the suspects. And it was thanks to the keen eye of patrol officers from Northumbria Police and Durham Constabulary that Atkinson and Bush were swiftly arrested.

Just hours after the first burglary report came in, officers carrying out joint patrol activity spotted two men walking on the hard shoulder westbound on the A19 and located the abandoned Nissan Juke which they had crashed and left written off nearby.

A short time later, Atkinson and Bush were located down a nearby side path rifling through bags of stolen property.

The men were taken into custody and later charged with offences including three counts of burglary and joint theft of a motor vehicle. They were remanded into custody after their first court appearance.

On Friday, November 18, the pair appeared at Newcastle Crown Court and both pleaded guilty to their part in the crime spree – and the duo were sentenced to more than seven years in jail.

Peter Hughes Atkinson, of Taylor Grove, Durham, was locked up for two years and three months after admitting three counts of burglary and one count of joint theft of a motor vehicle.

Jack Bush, of Lamb Drive in Sheffield, was jailed for five years and four months after also admitting three counts of burglary and one count of joint theft of a motor vehicle, as well as a further burglary offence committed in Sheffield.

Detective Constable Simon Cammack, of Northumbria Police’s Criminal Investigation Department, said: “This was a fantastic response with officers working across borders and acting swiftly on the concerns of the community to lock up Atkinson and Bush within a matter of hours of the first report coming in.

“Burglary is an invasive crime and we want to send a message that we will deliver robust action and effective justice against any offenders detected in our region.

“Luck soon ran out for the pair after they crashed the stolen car and officers caught them with their haul of stolen goods. In fact, they were even found to be wearing some of the items.

“As a result of these collaborative efforts, not only were we able to quickly detain and charge those involved, but we were also able to claim back a lot of the stolen property for those affected before it was sold or passed on. This included jewellery of sentimental value which had been stashed away by Atkinson and Bush for later.

“We would also ask the wider public, including businesses, to work with us to help reduce the impact burglary can have by ensuring doors, windows and properties are kept secure and valuables out of view.

Find out about the latest news in your area by signing up to our new messaging platform – Northumbria Connected.