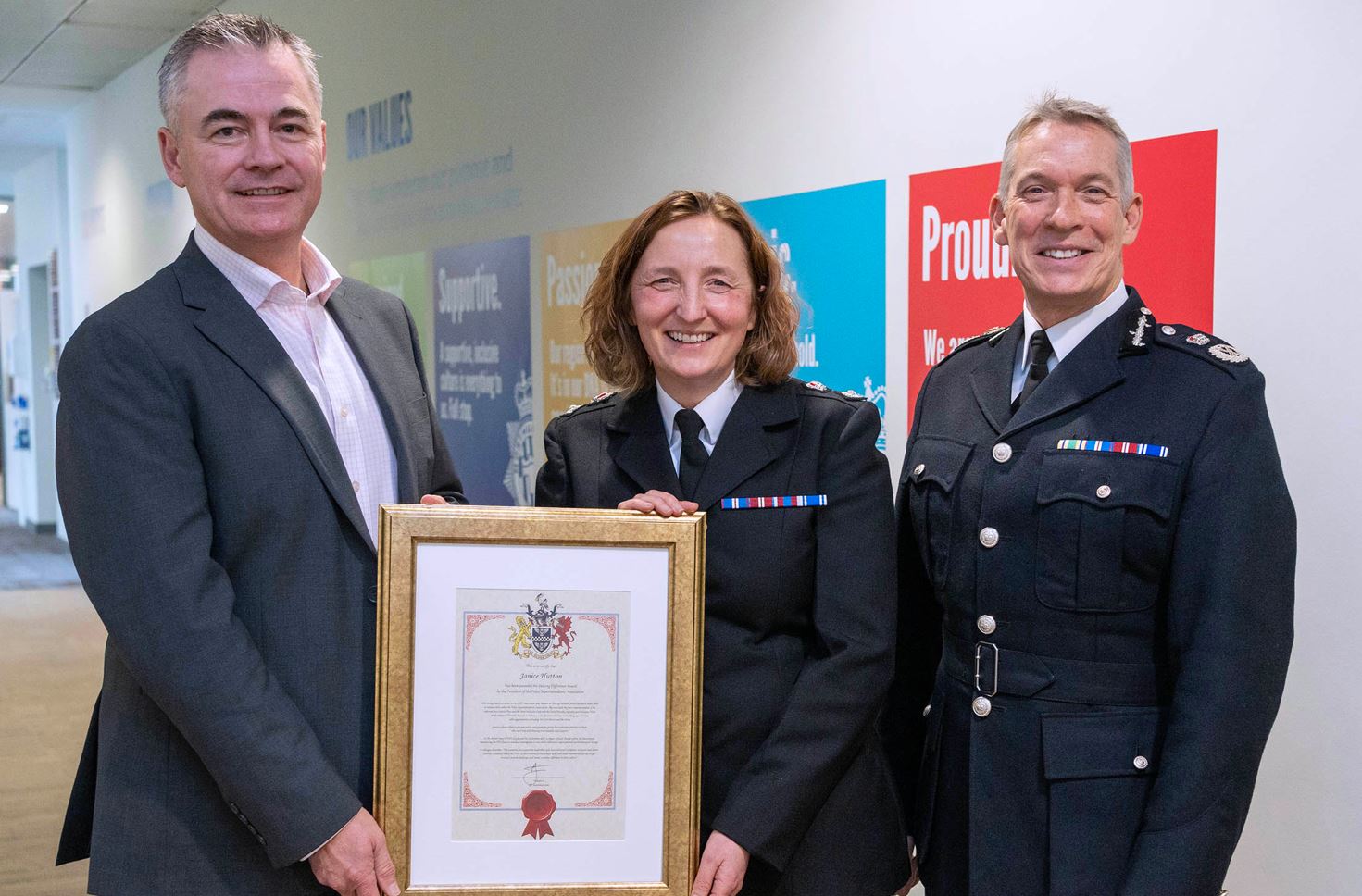 A senior Northumbria Police officer has received national recognition after helping to push for greater diversity within policing.

Chief Superintendent Janice Hutton was recently presented with the Valuing Difference award after being honoured at the Police Superintendents’ Association Presidents’ Awards 2022.

The annual accolade is awarded to an outstanding officer who has consistently promoted the importance of valuing difference in policing, both internally as well as in the communities they serve.

Now in her 31st year with the Force, Chief Supt Hutton leads the Force’s Harm Reduction & Communities team – driving the implementation of the National Race Action Plan as well as fronting the Force’s Inclusion Hub.

She is also involved in the Force’s LGBTQ+ Association, Women in Policing Network and Ethnic Minority Association.

Chief Supt Hutton said: "Promoting diversity and inclusion within policing is something I'm very passionate about and I'm fortunate to be involved in many different areas of the Force where I can champion this.

"To be recognised in this way was unexpected, and I'm extremely proud and humbled to have been considered.

"As a senior leader, I believe it is our responsibility to help shape the future of policing for the better and ensure Forces are as inclusive and reflective of our communities as possible."

Northumbria Police Chief Constable Winton Keenen QPM said: “People are at the heart of everything we do in Northumbria and Janice is somebody who actively encapsulates that.

“She has shown outstanding leadership, kindness and compassion throughout her many years of service to help drive positive change and promote greater diversity within policing – all while inspiring those around her.

“Janice continues to be involved in many areas of the Force and cares deeply about her colleagues and the wider public.

“I am absolutely delighted that she has received this outstanding recognition and would like to congratulate her on behalf of Northumbria Police. She is a thoroughly deserving recipient of the award.”

The annual PSA President’s Awards recognise officers across the UK for their work in policing excellence, championing diversity, leadership and for outstanding long service.

Historically the awards have been presented at the association’s annual conference, but the 2022 conference was cancelled following the sad death of Queen Elizabeth II.

“Superintendents are the most senior operational police officers, working with the highest levels of responsibility,” PSA President Paul Fotheringham said.

“Despite this, members such as Janice consistently go above and beyond for the benefit of their Force, their colleagues and their communities.

“I would like to congratulate Janice on receiving this award, which recognises the outstanding work she has done to support and represent colleagues and to push for greater diversity within policing.

“Valuing difference is a core priority for our association and it takes people such as Janice, who are proactively seeking change both locally and nationally, to make the progress we need.”